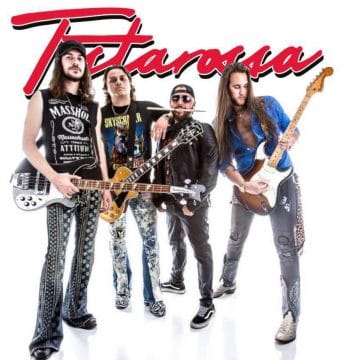 Testarossa‘s “Biography” on their Facebook page indicates (with slight edits):

“Testarossa is a hard rock party band. We bring five guitars to the show and only play two, just because it looks cool. Our stage show will get the place shaking like like a bad ball joint on your ’89 Camaro. We write simple, catchy songs that will have you singing along. With loud, flamboyant guitars, thundering drums, thumping bass, and bourbon and pipe tobacco tinged vocals– if our music doesn’t make you wanna have a good time, you probably weren’t gonna have one anyway. So come on out and see us for a visual and audio induced euphoria that will leave you craving more.

Having played with bands such as Saliva, Hinder, Saving Abel, Otherwise, and Like A Storm, we continue to work towards bigger and better things!”

In the age of autotuned vocals, poorly written songs, and detuned guitars, one band emerges from the ashes. With nothing to prove and no one to impress, they…