El Paso, Texas, USA based rockers Crash have released a video for their song “Shot Of Gasoline” from their EP Four Play. 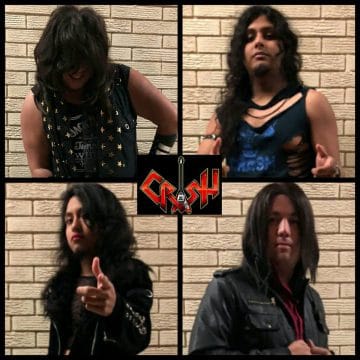 The following message was posted on Crash‘s Facebook page yesterday:

“We were going to wait till tomorrow but we decided to give you an early Christmas gift.

We present to the official music video for Shot Of Gasoline. I also want to thank everyone who participated and a big thanks to Larry Howe from Vicious Rumors and Carlos Cruz from Stonebreed for lending us their faces.”

“Since 2011, Crash has been bringing back the fire of 80s rock n roll to audiences everywhere. Born in El Paso, TX the quartet uses killer vocals, driving basslines, screaming guitars, and pounding drums to make music that brings the soul of 80s heavy metal to a modern and revamped age. Despite lineup changes over the years, Crash still brings not just rockin’ tunes, but the rockin’ attitude for a live preformance that’s never dull. With Danny on vocals, Rollin on bass, Orson on guitar, and Julio on drums, Crash is ready to rock the stage right through the roof!”