THAT METAL SHOW RETURNS FOR A THIRD SEASON 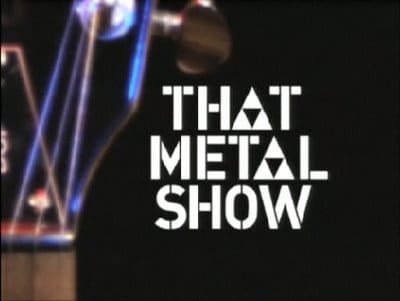 VH1 Classic set trends and broke molds two seasons ago when it mixed the best of “The View” with “Headbangers’ Ball” to create “That Metal Show,” an outrageously funny weekly series airing every Saturday at 11PM* that discusses and debates everything in the world of heavy metal. Now, hard rock and metal’s most established talk show returns for a third round with more exclusive interviews and behind the scene footage from the top metal festivals of the year. The season kicks off on VH1 Classic on Saturday, October 3 first with the critically acclaimed documentary, “Anvil! The Story of Anvil” at 9PM* and then the Canadian heavy metal band gives an exclusive interview and performance for the one-hour season premiere with “That Metal Show: Anvil Special” at 11PM*.

Each week hosts Eddie Trunk, Jim Florentine, and Don Jamieson discuss the latest rock news, share stories and argue about their favorite bands. Joined by special guests who weigh in with their opinions and offer their own unique viewpoints, the show caters to some of the most opinionated heavy metal and hard rock fans across the country. This season’s scheduled guests include: Ratt, Alica Cooper, Sebastian Bach, Blackie Lawless, Chickenfoot, WWE’s Chris Jericho, Judas Priest’s Rob Halford, Steve Vai, Slayer and many more.

All this Fall, watch Don, Jim and Eddie as they talk about the latest news in classic hard rock and metal, as well as hit the road to connect with fans and pull some hysterical man-on-the-street pranks. “That Metal Show” is also proudly bringing back your favorite studio segments, like “WHATEVER HAPPENED TO”, our host’s “PICK OF THE WEEK” and, of course, their weekly battle to settle all metal battles and end all debates, once and for all, in “THE THROWDOWN”. This season also introduces interview and man-on-the-street segments sponsored by Miller High Life beer called “Living the High Life” where viewers will get a first-hand look at the guys pulling hysterical pranks on the road and connecting with fans. Whether it’s Eddie kissing Ace Frehley’s VH1 Rock Honors ring or Jim or Don getting into the action on stage, viewers can expect the unexpected.

Fans can catch all of season one and season two online at VH1Classic.com. New episodes will launch online every Monday morning following the show’s on-air premiere. Additionally, fans can also ask a “WHATEVER HAPPENED TO” question to the guys via the VH1 Blog. Select questions may end up on air.

“That Metal Show” is a production of VH1 Classic. Adam Heydt serves as Director with Lee Rolontz and Keshia Williams as Executive Producers for VH1 and Jeff Baumgardner producer for the series.

Launched in May 2000, VH1 Classic is a 24-hour network that present videos, concerts and music specials all day long, featuring the best of rock, soul and pop artists from the 60’s, 70’s and 80’s, including The Rolling Stones, The Who, Led Zeppelin, AC/DC, Bruce Springsteen, Michael Jackson, Prince, Whitney Houston, Madonna, and U2. Learn more at VH1Classic.com.

Courtesy of www.sleazeroxx.com and www.prnewswire.com