The 69 Eyes frontman Jyrki 69 was recently interviewed by Jay Oakley for Just A Rock N Roll Junkie. Earlier this year, The 69 Eyes announced their first tour of the USA in ten years. 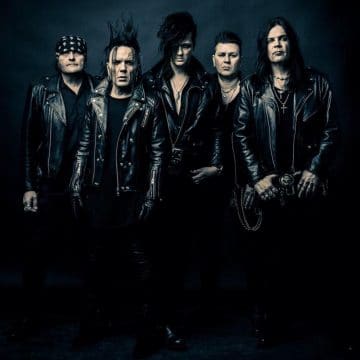 It was pointed out that The 69 Eyes band line-up has been solid and hasn’t changed, and that has to be gratifying to which Jyrki 69 replied:

“Well, I feel sorry for anyone who is starting a band right now or tries to get any kind of new lineup together because it’s pretty hard. There’s so much stuff coming up and trying to get people’s attention so that obviously helps that we are a little older. In someone’s eyes we are an 80s band because we started in the ’89 but an older band that has paid their dues and we have the fan base and we’re still competing for attention with people who come to the shows with younger artists or even more hipster names. Even if you go to shows, maybe you go to see a show like Aerosmith or huge artists like that and don’t have the time or money to spend on a minor act if you even like them. But, we’ve been lucky in many ways and as weird as this sounds, even on this tour I feel the best is yet to come. It’s weird but it feels real like that and musically we’re releasing records because we want to because we think we can get much better and the band is getting better and better all the time.

Like The Rolling Stones, I think they’re at their best live recently and if you go and see Judas Priest the new album (Firepower) is blowing your mind. It’s insane for old these guys are and how long these guys have been doing it and it’s the best metal record you can imagine from anybody and then going to see them live. Also, Ozzy Osbourne was really good when I saw him. I saw him for the first time on the No More Tours Tour in the 90s and I think Ozzy was at his best when I saw him last year so I think a similar thing is happening for The 69 Eyes. I think we are just getting better and I’m happy that we make fans so happy as well. They stuck with us through the times so it’s cool. Of course, there’s also younger generations all the time which is also amazing. Even on this American tour, we’re not just a nostalgia trip for MySpace or MTV or the Jackass guys, there are young generations as well in the crowd. It’s fucking cool.”

You can read the rest of the interview with Jyrki 69 at the Just A Rock N Roll Junkie‘s website.