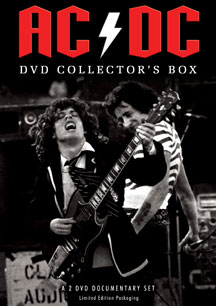 THE AC/DC DVD COLLECTOR’S BOX UNATHORIZED DUE IN AUGUST:

The AC/DC ‘DVD Collector’s Box’ is a double documentary DVD package containing previously unseen performance footage and much more and is due for release on August 5, 2008.

This DVD box set contains the previously available programs “”And Then There Was Rock” and “Back In Black: Classic Album Under Review.” Each film features rare and obscure footage, exclusive interviews, contributions from friends colleagues and associates, review and critique from the band’s biographers and the finest rock journalists, location shoots, news reports and studio/live versions of the band’s best loved tunes.

The first film examines the era when the group was fronted by the extraordinary Bon Scott, arguably the finest showman to lead a rock band this side of Freddie Mercury. The film gets to the heart of what made AC/DC the band they became and takes the story up to the tragic and premature death of Bon in 1980.

The second film in the set covers the aftermath of Scott’s death and the recording of AC/DC’s most successful album, Back In Black, for which they brought in the ever popular Geordie wild-man Brian Johnson. Johnson was a vocalist with a unique style, but he did not attempt to replicate his predecessor. Instead, using talent, confidence and good grace, he made the position his own and of course remains the much-loved frontman to this day.

In completion, this set provides a unique overview of the career of AC/DC and provides the most entertaining, enlightening and informative document on the band to emerge. They’ve played the loudest, rawest, good time rock music for some 35 years and they remain as popular today as they have ever been; AC/DC are in a league of their own.