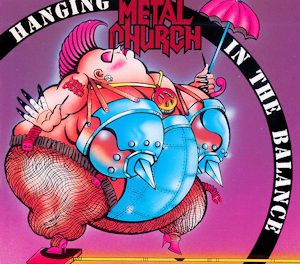 Metal Church frontman Mike Howe was recently interviewed by Sticks For Stones and spoke about the 1993 Hanging in The Balance album cover what prompted him to leave the band back in 1997. 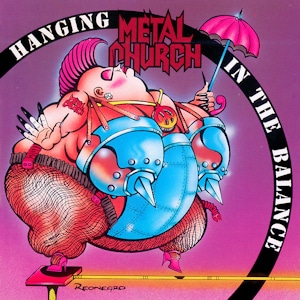 Howe stated: “There’s a huge story behind that album cover, and the huge story is that album cover right there was one of the final straws that broke my [camel’s] back and led me to leave Metal Church and the business. That was an album cover that was paid for and designed by our manager [with] an artist he liked, who did some Grateful Dead stuff and presented it to us. I said, ‘That is ridiculous. I hate that cover,’ and [he] pushed it out anyhow. That right there is one of my case-in-points how messed up the music business was back then, and how I had to get out before it ruined my love of my band… I was proud of the music that we had written. It was just being marred by bad decisions from management and [the] record company. That’s why I left.”

With respect to his 20 year gap between his stints in Metal Church, Howe advised: “I lived my life just like everybody else. I was a carpenter/builder, and I raised two boys. Out of the blue, I got a call from Kurdt, and he invited me back. At first, I was apprehensive — I was happy to be retired [from music]; I had a great career and [was] very grateful for what I had — but because he’s an old friend, I was open to listening to his proposition. We had long talks — a lot of talks — about how the music industry had changed, and how file-sharing was making it more possible to live in different areas and have family life and not cutting into your personal time as much. With the advent of technology in that way, it really helps facilitate being in a band. We just started with writing the record, because I said, ‘I’m not coming back to Metal Church for nostalgia’s sake. If I’m going to do this, I want to make sure we can write music just as good, if not better, than what we were doing before.’ We took baby steps and started writing some songs… if we like the way it sounds, we keep it; if we don’t, we move on. We do that a few times until we had a good amount of songs, and we really liked what we were doing, so we put it out. That went well, and I said, ‘Okay, I’m ready to go on the road with that.’ This album, we took the same philosophy, and we’re very happy with the end result.”