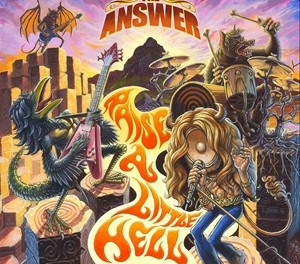 The Answer overcame the recent US Visa system crash and made it to the USA in time for their tour with Whitesnake.

The band’s new single “Gone Too Long”, which was mixed for radio by Chris Sheldon (Foo Fighters / Biffy Clyro), will be released on July 31st following the band’s North American Tour and in anticipation of their European Festival appearances and a special one off London Planet Rock London Borderline show on July 29th.

Today, the band premieres their latest video for “Gone Too Long”, taken from their latest album Raise A Little Hell (Napalm Records), which can be purchased at Amazon, iTunes or ebay.

With over 300,000 sales worldwide, The Answer are one of the hardest working Irish artists in rock, having performed over 200 shows worldwide in the last eighteen months.

“Right now it kinda feels like we’re living out a deleted scene from Easy Rider,” says singer Cormac Neeson. “We’re having a lot of fun and doing a pretty decent job promoting our new record Raise A Little Hell into the bargain. We’re back on home shores at the end of July, just in time to play a special one off gig in the legendary Borderline club in London. This gig coincides with the release of our new single “Gone Too Long”; it’s handy that isn’t it. Throw in another few European festivals that include the one and only Wacken and we might just have ourselves a busy assed summer.”