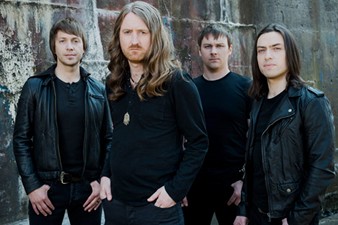 The Answer Returning In 2013 With New Album And Tour

Keeping the beacon of Irish rock music well and truly alight, The Answer have consistently delivered commercial and critically acclaimed albums. The band have also spent the last eight years touring the world and proving themselves to be an incendiary live act — spending almost two years as main support to AC/DC and playing to over 2 million people, performing festivals across the globe and also supporting the likes of The Rolling Stones, Whitesnake and Wolfmother as well as countless headline tours.

Since releasing their third studio album ‘Revival’ in late 2011, the band instigated a major shake up in their circumstances. With new management, live booking agents and record label on board, late 2012 saw The Answer enter the studio with former Little Angels vocalist Toby Jepson at the production helm. With mixes from rock icon Mike Fraser (AC/DC, Metallica), the new record ‘New Horizon’ will be their fourth studio album and will be released on September 30th, 2013, through Napalm Records GmbH.

The band were also honoured and privileged that the late Storm Thorgerson and his team saw fit to design the artwork for the new album and Storm was working on final ideas for the album cover just before his sad passing.

The Downpatrick quartet consists of Cormac Neeson (vocals), Paul Mahon (guitar), Micky Waters (bass) and James Heatley (drums). Neeson states, “We’re back and we’re back in a big way. Our love for rock ‘n’ roll is still as fresh as a skinny dip in the Lagan (that’s the big river that runs through Belfast!) and we really believe that this is by far and away our best album to date. We can’t wait to get out and play it live!”

The band are set to play their first headline dates since March 2012, undertaking a full 40 date European tour through October and November 2013. Confirmed 2013 dates are as follows: