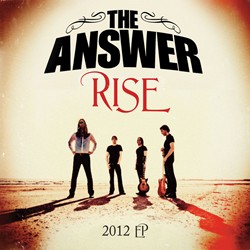 Irish rockers The Answer will release ‘Rise 2012 EP’ on July 1st through their own The Answer Productions label. This digital release will consist of a new 2012 radio edit mix of “Rise”, an extended full length version, a very special acoustic/orchestral version and a brand new mix of another gem called “Lost”.

The Answer have also been asked to perform a very special show to celebrate the 150th anniversary of the Ulster Hall.

“This show is a massive event in our native Ulster and we’re incredibly thrilled to be able to announce that on May 22nd, we will be performing our much requested song “Rise” in a special arrangement with the Ulster Orchestra,” states The Answer. “We’ve played a few momentous gigs in Northern Ireland’s most famous venue before, but this one will be unlike anything you’ve seen us do before. It will be a truly spectacular experience performing with one of the finest symphony orchestras in the world and to also finally get to perform a song that we have loved but never released — until now that is!”

On October 3rd The Answer released their feull-length album ‘Revival’, referred t as “one of the best things to come out of Ireland since Thin Lizzy” in a SleazeRoxx.com review.

‘Revival’ was produced by the Grammy-nominated Chris ‘Frenchie’ Smith, and was mixed by Chris Sheldon. The initial run of the album was a limited edition deluxe format with 24-page booklet and band sleeve-notes, plus an 11-track second disc containing previously unreleased studio, acoustic, demo and cover material.