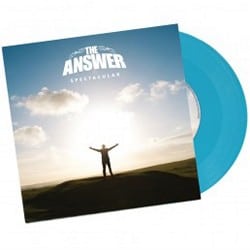 The Answer To Release “Spectacular” Single Ahead Of New Album

The Answer are set to return in 2013 with a new single “Spectacular”, available in August and followed by a new studio album called ‘New Horizon’ on September 30th.

Keeping the beacon of Irish rock music well and truly alight, The Answer have consistently delivered commercial and critically acclaimed albums. The band have toured the world extensively, proving themselves to be an incendiary live act — spending almost two years as main support to AC/DC and playing to over 2 million people, performing festivals across the globe and also supporting the likes of The Rolling Stones, Whitesnake and Wolfmother as well as countless headline tours.

Since their third studio album in late 2011, the band instigated a major shakeup in their circumstances and with new management, live booking agents and with new record label on board. Late 2012 saw them enter the studio with ex Little Angels vocalist Toby Jepson at the production helm. The new record, ‘New Horizon’ will be their fourth studio album and with mixes from rock icon Mike Fraser (AC/DC, Metallica), it will be released on September 30th through Napalm Records GmbH in multiple formats.

To shorten the anticipatory wait for the upcoming album, The Answer are making available the single “Spectacular”, which features an exclusive radio mix of the song as well as an acoustic version of the album title track “New Horizon” available on 7″ vinyl and an acoustic version of the song “Speak Now” available on the digital release. Each week the band will be streaming a new track from the upcoming album at www.theanswer.ie.

Fans have the chance to purchase a rare and strictly limited vinyl single of “Spectacular” released as a Sky Blue Vinyl 7″ and a Green Vinyl 7″, both exclusively available via www.napalmrecords.com. You don’t want to miss this great edition and soon to be a highly sought after collectible! If you are not fortunate enough to get one, you can obtain the single digitally through all of the major digital vendors.

The band were also honoured and privileged that the late Storm Thorgerson and his team designed the artwork for the new album/single and Storm was working on the album cover design just before his sad passing. In a statement released by Storm Studios, they said, “Never one for looking back or resting on his laurels Storm always got a thrill from working with young bands and from the idea of ‘newness’ in general. In his last few months Storm and the Storm Studios team threw ourselves wholeheartedly into many new projects and New Horizon was one of the last covers we designed together. As is our usual modus operandi, we interrogated the band at length about their music and lives, and listened to the album on repeat for a month. Our final designs were submitted to The Answer very shortly before Storm died. The image itself came from our thoughts about endings and new beginnings, very poignant for all concerned.”

The Downpatrick quartet consists of Cormac Neeson (vocals), Paul Mahon (guitar), Micky Waters (bass) and James Heatley (drums) and their UK tour will kick off in Belfast on October 11th. Australian band Tracer will perform as very special guests on the UK mainland run in what promises to be one of the finest rock tours at the end of 2013.