Australian rockers The Babes consisting of lead vocalist J.D, lead guitarist Donna D, bassist Corey Stone and drummer Moni Lashes have released a video for their song “Always Riding” which provides a recap of their recent tour of the United States of America. 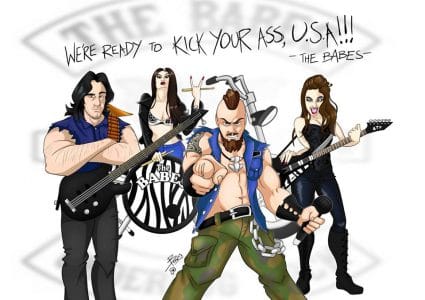 Back on December 19, 2018, The Babes posted as follows on their Facebook page about their latest video:

We are super proud to release the official video clip for our ballad dedicated to our Rock N Roll Gang, featuring a montage from our debut tour of the USA. ??”

“We make rock n roll music for the underdogs.

Imagine being in an American dive bar in ’78, Harley parked up front, hustlin’ someone at pool in your Wrangler jeans,… we like to think our songs are blasting out the jukebox.”

Music video by The Babes performing “It Ain’t Easy (c) 2017.NEW CD ON SALE NOW at http://www.TheBabesRock.com/storeAvailable on iTunes: https://itunes.apple….