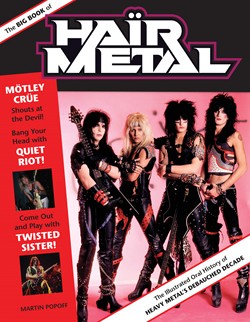 ‘The Big Book Of Hair Metal’ Coming In August

On August 14th Voyageur Press will release ‘The Big Book Of Hair Metal’, a 224 page book filled with over 500 photographs written by author Martin Popoff.

In the 1980s, heavy metal went mainstream. The dark themes and brain-busting riffage of bands like Black Sabbath and Deep Purple suddenly fell out of favor — replaced by a new legion of metalheads whose themes of girls, partying, girls, drugs, and girls were presented amid shredding solos and power ballads and who were, for some reason, more acceptable to the masses. In this ultimate guide to the subgenre, acclaimed heavy-metal journalist Martin Popoff examines hair metal in an all-encompassing oral history jacked up by a kaleidoscope of outrageous and previously unpublished quotes, anecdotes, photos, and memorabilia.

In crafting a narrative of hair metal, Popoff also examines the factors that contributed to the movement’s rise (including MTV, Reagan’s “morning in America,” and a general move toward prudish morals); the bands that inspired it (the Sweet, New York Dolls, Alice Cooper, and KISS, for a start); and the scenes that nurtured it (the Sunset Strip, anyone?). The ride finally ended circa 1991, when hair metal was replaced by grunge, but what a ride it was. Here it is in all of its primped-up glory.

Martin Popoff has been described as the world’s most famous heavy-metal journalist. He has penned more than 40 books on hard rock, heavy metal, and record collecting, including Voyageur Press’ ‘Rush: The Illustrated History’. He has also worked in film and television, his most recent projects being Rush: Beyond the Lighted Stage and VH1’s Metal Evolution. He was editor in chief of the now-retired Brave Words & Bloody Knuckles, Canada’s foremost metal publication for 14 years, and has also contributed to Revolver, Guitar World, Goldmine, Record Collector, and www.bravewords.com, with many record label band bios and liner notes to his credit as well.