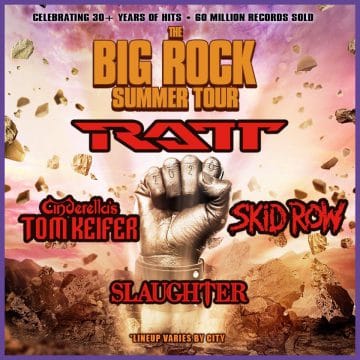 The tour was supposed to start at the House of Blues Myrtle Beach in Myrtle Beach, South Carolina, USA on May 29, 2020 and run on and off throughout the summer and end at the Hollywood Palladium in Los Angeles, California, USA on September 19, 2020.

On April 21st, it was announced that the May and June dates for the Big Rock Summer Tour were getting postponed.

Eventually, the inevitable had to happen and the Big Rock Summer Tour had no choice but to cancel its entire summer tour dates.

“The Big Rock Summer Tour will no longer be taking place as originally scheduled this summer and fall. Tickets will automatically be refunded at point of purchase. Thank you for understanding.”

“Unfortunately like the rest of the concerts, festivals and our Tour that was pushed into 2021. www.bigrocksummertour.com will NOT happen. RATT will be announcing shows Aug 2020. #ratt #Tour #rattproblem”

The good news for Ratt fans is that perhaps the band is seemingly now available to be re-added the M3 Rock Festival, which was originally supposed to proceed from May 1 to 3, 2020 with Ratt as its main headliner but it got rescheduled to September 4 to 6, 2020 (without Ratt in the line-up) due to the Covid-19 pandemic. Ratt were originally booked to play on September 5, 6, and 8, 2020 via the Big Rock Summer Tour.