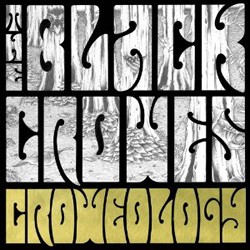 “20 Years of Tall Tales” is the title of the web series THE BLACK CROWES will roll out starting Tuesday, August 3, the street date for CROWEOLOGY (Silver Arrow/Megaforce Records), their first-ever double album of all-acoustic material with new arrangements of their best-loved songs and deep cuts.

In a wide-ranging and freewheeling interview marking the 20th anniversary of their landmark multi-platinum debut, 1990’s Shake Your Moneymaker, CHRIS ROBINSON talks about where THE BLACK CROWES have been and where they are now.

Throughout the month of August, the band will release via their website — www.blackcrowes.com — one webisode per day. It’s all here: the highs, the lows, the controversies, arrests, feuds and more. “20 Years of Tall Tales” was directed and produced by John Vanover and filmed earlier this month at Robinson’s Los Angeles home.

THE BLACK CROWES release their first-ever double album of all acoustic material, CROWEOLOGY. Due out Tuesday, August 3, 2010 via band’s label Silver Arrow through Megaforce Records, it features new arrangements of their best-loved songs and the band’s catalogue picks. The band will celebrate the album’s release that evening with a performance on “The Tonight Show with Jay Leno” and perform the next night, Wednesday, August 4, on “Jimmy Kimmel Live.” Next, they’ll kick off a four-month North American tour August 13. It will wrap Dec 19 with an six-night stand in San Francisco at The Fillmore December 12-19, after which Chris Robinson (vocals/guitar), Rich Robinson (guitar), Steve Gorman (drums), Sven Pipien (bass), Luther Dickinson (guitar) and Adam McDougall (keyboards) will go on a lengthy hiatus to catch their collective breaths and spend time with their families.

CROWEOLOGY spans THE BLACK CROWES’ revered catalog with acoustic renditions of 20 songs from their two decades of cosmic rock ‘n’ roll. Commemorating the 20th anniversary of their multi-platinum debut, 1990’s SHAKE YOUR MONEYMAKER, CROWEOLOGY gives listeners an intimate retrospective, stripping away these fan and band favorites like “Jealous Again,” “Remedy,” “She Talks To Angels” and “Wiser Time” to their very essence through brand new recordings, captured in 2009 at Sunset Sound Studios in Los Angeles. Paul Stacey produced CROWEOLOGY.

In order to thank fans for 20 years of support, CROWEOLOGY will be priced at the cost of a single album. In addition, it will be available on vinyl and as an iTunes LP. Listeners will get their first taste of CROWEOLOGY when “Jealous Again” and “Morning Song” hit radio this week.

Following the album’s release, THE BLACK CROWES will hit the road–with multiple nights in many key markets–on their “SAY GOODNIGHT TO THE BAD GUYS” tour. In most cities, the band will perform for three hours: a 90-minute “Acoustic Hors D’oeuvres” set, followed by a 90-minute “Electric Reception with THE BLACK CROWES.”