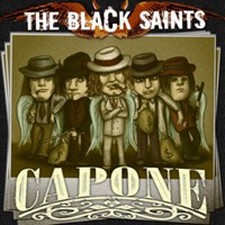 Wisconsin based rockers The Black Saints have released their newest single “Capone” — a voodoo infused slice of delicious hard rock n’ roll that is one of the band’s best showings to date. The tune is available exclusively for purchase at theblacksaints.com.

The band have also returned to the studio with The Heroes Lie frontman and owner of Cherry Pit Studio, Eric LaBrosse, to record a brand new single entitled “Amends” for release in early spring of 2012. The new single will showcase a whole new side to the band that expands on the melodic and soulful grooves that have been hinted at by earlier songs such as “Schoolin'” and “Beauty Queen”.

The Black Saints bass player B.B. Blackheart said, “What we’re recording right now is another aspect of what this band is all about. Every guy in the group thrives on melody and intensity. All of our music to this point has shown our fans how rock is done right and now we’re super amped up to express the other side of the coin. “Amends” is a song that connects on a really deep level with all of us and brings the music and mood to a totaly new place for us. It’s a place with a lot of soul and lyrically it resonates with anyone who has experienced the joys and pains of real love. Personally, it’s one of my favorite songs that we’ve ever recorded. We can’t wait to share it with the world.”

Formed in early 2009, The Black Saints have been preaching the glorious intensity and frenetic power of the most classic elements of rock n’ roll and punk in their own delicious and wicked voice. They unabashedly revel in the sound of guitar-drenched rock revival that defines a new generation of independent music listener hungry for something other than the spoon fed mass-media examples of what passes for modern rock music.

The band skillfully sets itself apart with killer guitar melodies, sleazy grooves, a tight musicianship and intense passion mixed with wild unpredictability. This isn’t a band built out of cut and paste songwriting and phony auto-tuned vocal melodies. The Black Saints are true artists and musicians who mean what they play and leave it all on the stage for the crowd to revel in.

The Black Saints have toured all over the Midwest and to the East Coast of the United States. Their artist debut arrived at Summerfest, the world’s largest outdoor music festival, where they have performed every year since the band’s inception. Their high energy live perfomance has seen them share the stage with the likes of LA’s Steel Panther, founding member of KISS Ace Frehley, The Last Vegas, Sevendust, Blind Melon, Vains Of Jenna, and The Dirty Pearls among other established artists.

Their debut EP, ‘All Sinners Welcome’, is a blistering collection of six sleazed-up high energy rockers. The record features their hit single “Dead Man Walking” and has already gotten airplay in Colombia, Australia, Belgium, Japan, South Africa, Canada, and the USA where the band has been featured by the Hard Rock Nights radio show in its ’15 bands to watch in 2011′ list of up and coming artists.

Things continue to look up for this promising young band of rock n’ rollers as they continue spreading their sound throughout the world through touring, airplay, and word of mouth. This is rock music as it was meant to be. This is how The Black Saints do it.