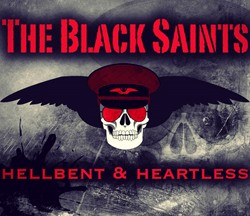 The Black Saints’ long awaited follow-up to ‘All Sinners Welcome’ is set to be released worldwide on December 7th and can be purchased at www.theblacksaints.com.

The new five track EP, ‘Hellbent & Heartless’, is a very definitive record for this Milwaukee, Wisconsin band in two major ways. Number one, it features Benny Sinn on drums who was brought in to replace Henry Malarky after his departure from the band and number two, it shows the band’s musical growth in every song. This is the EP where everyone has really locked into their individual instrument and made it truly their own with a very unique and distinctive, flavorful sound.

As a little something extra, all this week the band are taking a song per day off of the new EP and breaking it down for you, revealing to you what it is about through their Facebook page at www.facebook.com/theblacksaints. Lyrics will also be provided for that specific song through the band’s website.

The Black Saints will be playing two CD release shows. December 7th at Route 20 Outhouse in Racine with party rockers Carbellion and also December 21st at Rooters in Waukesha for the Rockageddon show with national act The Last Vegas.

Formed in early 2009, The Black Saints have been preaching the glorious intensity and frenetic power of the most classic elements of rock n’ roll and punk in their own delicious and wicked voice. They unabashedly revel in the sound of guitar-drenched rock revival that defines a new generation of independent music listener hungry for something other than the spoon fed mass-media examples of what passes for modern rock music.

With just over two years in the scene, this hard rock five-piece have toured all over the Midwest and to the East Coast of the United States, playing over 80 shows in that short time. Their artist debut arrived at Summerfest, the world’s largest outdoor music festival, where they have performed every year since the band’s inception. Their high energy live perfomance has seen them share the stage with the likes of LA’s Steel Panther, founding member of KISS Ace Frehley, The Last Vegas, Sevendust, Blind Melon, Vains Of Jenna, and The Dirty Pearls among other established artists.