The Blouse Brothers consisting of lead vocalist / guitarist Chris Clark, drummer Jeff Mortimer, guitarist Gary Jordan and bassist Dave Elmore (whose four members were also known as Babylon Shakes until that group announced late last year that it was disbanding) have released a video for their track “Another Broken Halo” from their upcoming Reclusive Winos concert, which will be available in the fall of 2020. 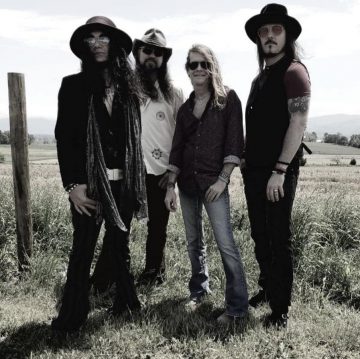 In an interview with Sleaze Roxx back in May 2019, Clark explained why Babylon Shakes decided to also form The Blouse Brothers as he indicated:

“Initially, we were just going to do acoustic Babylon shows, playing our songs and some covers as well. Maybe a few select gigs closer to home and allow us to become even tighter as a band. We started playing acoustically just for fun and to get Gary and Dave up to speed in the new line-up. So at the same time we are doing all of this, we also really begin to dive deeper into our influences — Rolling Stones, Faces, Allman Brothers, Gram Parsons, etc. Bringing Dave into the band and his wealth of musical knowledge fed into this more ’70s rock vibe.

We started hanging out in downtown Staunton, Virginia — an older college town — and this whole new burst of inspiration began to happen. We started writing songs like crazy and they are absolutely amazing! More acoustic blues, country, soul driven songs. I’m singing in a different, more soulful kind of voice that I didn’t even know I had. There are more vocal harmonies and extended jams. The only caveat is that they are so different from the vintage sleaze sound of Babylon that we felt like we should call it something else. So the Blouse Brothers has sort become our alter ego. Same guys — just a different sound. We will be recording later this month so hopefully there will be some audio available soon.”