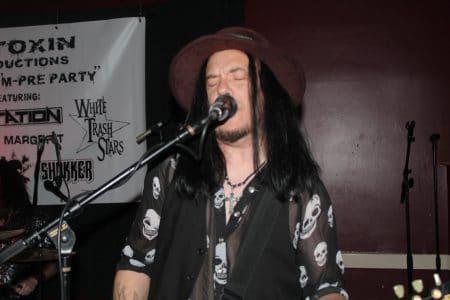 Speaking exclusively to Sleaze Roxx, Clark explained why he decided to release a single on his own as he stated: “I just realized I had so much free time on my hands to write and the songs just kept coming so I thought that I would release two tracks on my own to test the waters. We have all the tracks written for The Blouse Brothers‘ album so with the extra time and material, I felt it was a good time to put something out. I also wanted to give people a taste of the sound and style that we have evolved into.

In terms of what the future holds for him as a solo artist, Clark indicated: “There will be more songs in the future. I like the flexibility of working with singles. I have another track ready for an early January release.”

In regard to The Blouse Brothers, Clark stated: “The Blouse Brothers‘ album Augusta County Gypsy Blues will be a 10 song vinyl / 12 song digital package for an early spring release, possibly March or April 2021. We are doing everything ourselves from basic tracks to mixing and mastering. Currently we have nine songs down and are on track to finish recording by the end of this year.”