The BulletBoys Set To Reunite For December 30th Show And DVD 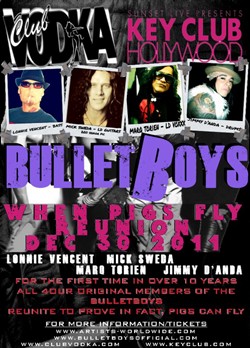 1980s powerhouse the BulletBoys are reuniting for an explosive night of headbanging and earsplitting hard rock, treating fans to a one-night-only performance in celebration of their epic career. Featuring all four original members of the inaugural 1987 lineup, this landmark event will take place on December 30th at 6:30pm at the iconic Key Club in West Hollywood, California.

Marq Torien, Mick Sweda, Lonnie Vencent, and Jimmy D’anda are joining forces for the first time in over 10 years to thrill both past and present fans on the Sunset Strip in Southern California over the New Year’s Eve weekend. All of their smash hits will be in display; including popular singles such as “Smooth up in Ya,” “For the Love of Money,” “Hang on St. Christopher” and more. This exciting evening is also being filmed for a live DVD, documenting the BulletBoys and everyone in attendance in all of their glam-metal glory.

The BulletBoys have released seven studio albums over their 24 year career, becoming a breaking sensation on radio and MTV with their self-titled debut in 1988 and follow-up record ‘Freakshow’ in 1991. Both records enjoyed significant success on the Billboard charts, along with singles like “Smooth up in Ya” and “For the Love of Money.” Drawing from legendary influences such as Van Halen and AC/DC, they were a significant force during the metal movement which dominated the airwaves during the late 80s and early 90s. The group has continued to release more material in recent years, such as ’10c Billionaire’ in 2009, and a live record, ‘Behind the Orange Curtain’ in 2007, thanks to the leadership and drive of their vibrant and forceful frontman, Marq Torien.

The Los Angeles natives chose one of the hottest clubs in the area for their reunion extravaganza, returning to the original hotbed for 80s metal with a marquee lineup. Tickets are available from the Key Club website or at the box office for just $18 in advance, or $20 day-of-show, guaranteeing each person an unforgettable night which will be captured forever in brilliant high definition on BulletBoys’ upcoming live DVD. Attendees must be at least 16 years of age to attend, and the Key Club is located at 9039 Sunset Blvd. in West Hollywood, California. Don’t miss a once-in-a-lifetime opportunity to witness the BulletBoys prove that pigs really can fly.