UK hard rockers The Burning Crows have come out from their lengthy hiatus, which dates back to the end of 2016, to play three shows in the UK from September 13 to 15, 2018 along with Dust Bowl Jokies.

“You wanted it. You got it. For one week only, The Burning Crows are back with a run of summertime shows with Sweden’s own Dust Bowl Jokies… Tickets on sale NOW – Be there. 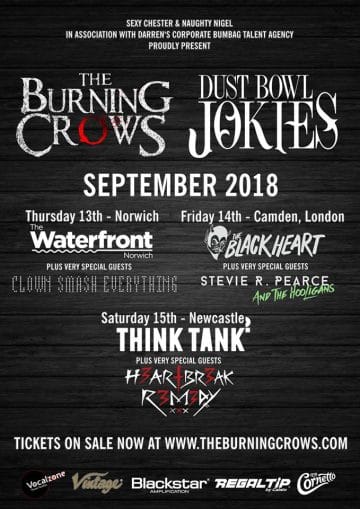 Showcasing a sound rooted firmly in old time rock n’ roll but with an attitude, style & swagger all their own, The Burning Crows have earned the reputation of being one of the very best live bands on the scene today. With two critically acclaimed studio albums, a live album, EP’s, singles, videos and numerous national tours & festivals, the band have proved time and time again that in an industry now governed by buy-ons, backhanders and bullshit, you can still do it your own way and on your own terms. So, for those of you here for a good time – do come in, we’ve been expecting you…

Following the amazing public and media reaction to the release of their first EP, “Never Had It So Good“, the subsequent headline tour of the UK & Ireland, a slot at Hard Rock Hell and featuring as special guests to The Quireboys throughout their winter tour, bravado rock n rollers, The Burning Crows, couldn’t have asked for a better 2012.

After an overwhelming demand for more, the band returned to the world famous Rockfield Studios in Wales, to once again working with legendary producer Nick Brine (The Darkness, Bruce Springsteen, Oasis) to record ‘Behind The Veil’. Funded in part through a successful PledgeMusic campaign which achieved over 154% of its goal, the album was released in summer 2013, supported by a number of music videos, highbrow shows and has since earned rave reviews from both fans and the media alike.

Not content to wait until they returned to the studio again, the band also released a limited edition live album’LIVE …From Behind The Veil‘ in 2014, limited to just 500 signed discs and following the success of the release embarked upon UK tours with both Falling Red and Sweden’s Dust Bowl Jokies.

There truly is no rest for the wicked however and following a second PledgeMusic project, which subsequently exceeded all expectations by reaching it’s goal in less than a week and exceeding 250% of target at completion, the band returned to Rockfield Studios to once again working with Nick Brine and record their sophomore album, ‘Murder At The Gin House’. Quickly earning critical acclaim in the mainstream and independent media, the release led to a full UK Tour in 2016 with most venues selling out in just a few days. The band closed the year with more festivals and a hometown show to 1,500 fans before taking a long overdue break. Now, finally returned from the pub and for one week only, The Burning Crows are back with a run of summertime shows with Sweden’s own Dust Bowl Jokies… Tickets on sale NOW.”

Back on January 16, 2017, The Burning Crows explained their rationale for going on hiatus via the following Facebook post:

“A very Happy (and belated) New Year Everyone! Hope 2017 is treating you good so far!

You’ll have to excuse the radio silence as of late. We haven’t forgotten about you all, on the contrary in fact, and so we just wanted to check in and fill you all in with what’s been happening… Last year was another great year for us and as always, that’s thanks largely to all of you guys travelling round the country to see us, supporting the tours, buying the albums, spreading the word and just generally being amazing. 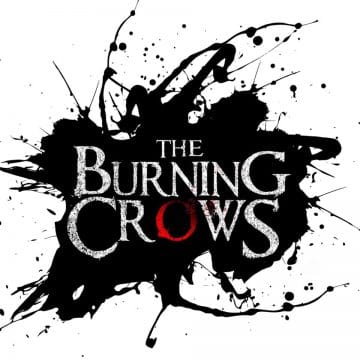 We can’t deny however, that it’s getting harder and harder to move up to the next level so to speak in what they call the music ‘industry’, for it is just that; a very selective money making machine in a world where the expectation is that everything should be cheaper, quicker and more accesible today than it was yesterday. As such in the vast majority of cases, unless you have the money, and we mean serious money, to pay to get yourselves into magazines, onto bigger tours and on the radio, it’s becoming ever clearer that the likelyhood of anyone giving you the time of day is probably less than Chapman playing a gig with his shirt on. As such, we’ve personally never taken a penny back from any of the tours, merch or album sales and have, as a lot of bands do, put thousands of pounds of our own money in to meet the shortfall and keep the beast running so to speak. By beast, we of course mean ‘band’, not Will.

We’re not complaining though and when we think of everything we’ve done up to now, we wouldn’t change a thing and we’re pleased to say that looking back, we’ve always done it our own way, on our own terms, and without getting caught up in the ‘game’ that so many others unfortunately do. As it happens, we’ve loved every second. We’ve been lucky enough to tour the country, seen and been places we’ve never seen before. Made albums in amazing studios with the most talented bastards around, that we are and always will be massively proud of. Met incredible people and made friends for life along the way whilst of course, having a couple of laughs doing it. Actually, I think we all know that that’s an understatement. We’ve never really stopped laughing since the beginning and looking back on everything we’ve done together and everywhere we’ve been together, we really have had the time of our lives and we owe it all to you… So to everyone who’s been a part of it with us up to now, it really has been a privelidge, an honour and it goes without saying that The Burning Crows will always be as much yours as it is ours.

As we write this, we realise that it all sounds a bit doom and gloom. It shouldn’t. We’re not breaking up. Nobody has fallen out. Far from it. We’ve never actually had a proper argument in all these years and if that’s not testament to how much of a good time we have doing this, then we don’t know what is. Bands always say “it’s all about the music” but for us, in retrospect, not entirely. Obviously the music is a massive part of what we do and the vehichle that makes it all happen, but with us, it’s always been about the journey and the people that come with it. The laughs, the stories, the memories and whilst we still love what we do in the way that we do now, we’ll keep on doing it and in a manner more persistent and determined than Lance trying to catch a sheep in the Scottish highlands.

What we’re trying to say is that what we do next is massively important and we need to get it right instead of getting stuck in a rut as so many unfortunately others do. You see every other week that another great unsigned band has broken up but we absolutely don’t want to do that, so instead we’re just going to take a little time away from it all to work out where and how we go from here. There’s already new songs being demo’d with recording pencilled in at Brino‘s shiny new studio in Spain later in the year, so this really isn’t it and we will be back.

Until then, know that we love you all and from the bottom of our hearts, we thank you all for everything; We would have given up a long time ago had it not been for the endless support you’ve given us… Here’s to the next chapter everyone – see you soon!

Sleaze Roxx stated the following in its review of The Burning Crows‘ last full-length studio album Murder At The Gin House: “If you like energy in your songs with some British rock vibe, pick this record up but maybe try to listen it first and then decide. You might love it. You definitely won’t hate it 2015 has been a very good year for rock releases and time in life is limited. My advice to you is to check out Murder At The Gin House first before purchasing it and then decide if this is your cup of tea.”