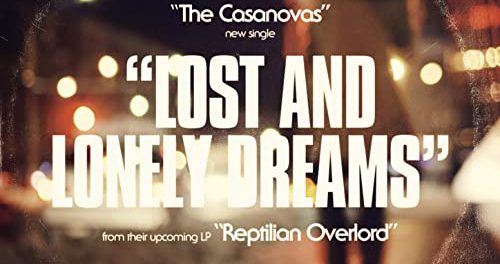 The Casanovas have released a new single “Lost And Lonely Dreams” from their upcoming fifth studio album Reptilian Overlord, which will be available on August 26, 2020. 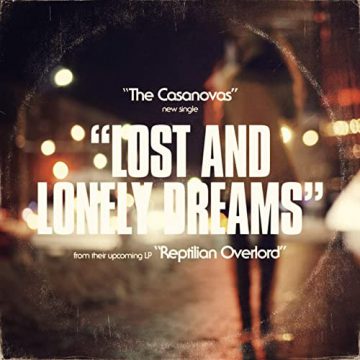 “With Mark Opitz at the helm, The Casanovas have recorded their best album yet. “Reptilian Overlord”, which will be released August 26th, blends layers of old with layers of new. It rocks hard, and it sounds fucking great. The new single “Lost And Lonely Dreams” is one of the more reflective songs on the album, but those twin lead guitars will warm the hearts of all rockers, young and old, proving once again that, when it comes to reimagining ‘70s styled, blues-based hard rock, these guys really are what the doctor ordered.

“Lost And Lonely Dreams” follows the previous single “Red Hot”, which the group launched with a killer live-streamed set from Melbourne venue Musicland. The lyric video for the song was premiered on popular Brazilian rock site KZG.

Although they got caught up in the early 21st-century rock mania, The Casanovas always had deeper roots. Hailing from the live rock’n’roll capital of the universe – Melbourne – The Casanovas had the grit and energy of predecessors like Bored and The Powder Monkeys, as well of course as Melbourne’s once-adopted sons, AC/DC. They were a merging of two great local traditions – metal-tinged punk rock’n’roll, and larrikin Oz pub rock – and they had a twinkle in their eye and brought a youthful freshness to both when they appeared at the start of the century.

Having already shared a bill with a barely-known The White Stripes in Melbourne in 2000, The Casanovas first hit the international stage in 2002, playing the UK and touring Europe with their Kiwi brothers in arms, The Datsuns. Then came SXSW, Triple J rotation, The Big Day Out, and shows/tours with Motörhead, Mötley Crüe, The Darkness, The Living End, The Black Crowes, Redd Kross and Airbourne. They were riding high, having experiences as a band that they had never even dreamed of. And then it started to fade, as these things always do.

Fast-forward to 2020 and The Casanovas are now elder statesmen. The rock mania seems to be starting up again, and these guys are maybe in a similar position to the heroes they looked up to when they were starting out. They were gone for some time, but a well-received performance at the 10-year memorial show for The Powder Monkeys’ Tim Hemensley in 2013 got then playing again, and an unexpected European tour opportunity in 2017 kicked them into gear properly. In Europe, they played packed out venues heaving with beer and sweat and to a rabid audience wanting to rock’n’roll.

It was just like the old days at The Tote, and the band was reborn. Then new drummer Brett Wolfenden came on board, joining frontman/guitarist Tommy Boyce and longtime bass player Damo Campbell. Wolfie, longtime sideman for You Am I’s Davey Lane in The Pictures, Thee Marshmallow Overcoat and with Jim Keays and Todd Rundgren, opened things up and helped them find even greater joy in playing. Last year, with a set of great new material, the re-tooled Casanovas hit the studio with iconic Oz rock producer Mark Opitz to record a new album.

The Casanovas and Mark Optiz pairing is, of course, the kind of match that once gave Greg Evans his thrills. Opitz had been a protégé of Harry Vanda & George Young at Alberts back in the ‘70s. He helped capture the blood and thunder as Vanda & Young’s engineer on AC/DC’s “Let There Be Rock” and “Powerage” albums, before taking the Alberts sound towards the next decade with his production on The Angels’ massive “Face To Face” album. He followed up that with The Angels’ second masterpiece “No Exit”, then helped define the Oz rock sound with his work with Cold Chisel (including their breakthrough album “East”), The Hitmen and The Divinyls.”