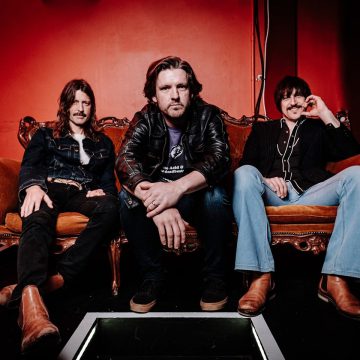 “Last year, with a set of great new material, the re-tooled Casanovas hit the studio with iconic Oz rock producer Mark Opitz (AC/DC, The Angels, Cold Chisel, The Divinyls) to record a new album. The Casanovas provided the first taste from the upcoming album late last year when they released their first new music in over four years with popular single ‘Hollywood Riot’.

This new single ‘Red Hot’ proves to live up to its name, with James “The Hound Dog” Young, owner of the iconic Cherry Bar in the boys’ hometown calling ‘Red Hot’ “another scorcher”. “It’s like they’ve captured all my favourite rock acts – Cheap Trick, Stones, Kiss, ZZ Top & AC/DC, and crammed them all into their own jar of Vegemite,” he proclaims.

The Casanovas will launch the single this Saturday Night at 8PM (AEST), with a live-streamed performance from Melbourne venue Musicland. Details here.

‘Red Hot’ revels in everything that fans have come to know and love about The Casanovas, and it shows the impact of Opitz, who was involved in many of the band’s favourite albums like Powerage and Face To Face. As Casanovas bassist Damo Campbell says, “Mark is the master at miking for great guitar tones. He definitely brought some of those techniques into our sessions…  It was also pretty inspiring to be in the studio hearing some of Mark‘s stories of some of the great rock bands he has worked with over his career.”

Singer/guitarist Tommy Boyce credits legendary Brit blues rockers Free as an influence on ‘Red Hot’. Free‘s rock-solid, soulful groove had a huge influence on Tommy during the writing of this song. “I was enjoying those big riffs that have heaps of space in between chords,” says Tommy. “That kind of tough, unhurried swagger.”

Swagger is something that these guys have in spades. Although they got caught up in the early 21st-century rock mania, The Casanovas always had deeper roots and a natural ease. Hailing from the Live Rock’n’Roll Capital of the Universe – Melbourne – The Casanovas were a merging of two great local traditions – punk rock’n’roll and Oz Rock – and they had a twinkle in their eye and brought a youthful freshness to both when they appeared at the start of the century.

‘Red Hot’ is available on all platforms now, along with its B-Side, ‘St Kilda is Fucked’, a heartfelt (albeit cheeky) denunciation of the one-time jewel of Melbourne’s South; once a rock’n’roll haven, now gentrified. It’s not going to win them any new fans in their old stomping ground but might raise a smile amongst some of their old ones.”

The Casanovas‘ “Shake It” video: