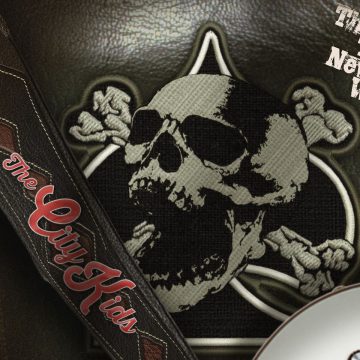 The following message was posted on The City Kids‘ Facebook page five days ago:

“The 3rd single from the album “Things That Never Were“, featuring Tracii Guns on additional lead guitar

A word from the director:

“The object was to try to create the feeling of drugs, alcohol and addiction of any persuasion. What it feels like to not only be under the influence, but completely in the grasp and not able to escape. I think it does that. It gets in your head and smashes it. There’s heat and intensity in the insanity and frenzy of it all. As asset strapped as we are, this thing really does bring the band into one space as a collective unit. Another of those objectives. A clip to me is more than a sales tool, like film, it needs to tell a story, set an attitude. There’s a chaos in this thing that really gives it a what the fuck moment. It’s like I described it to Alexa Jo a few weeks ago, it’s either a masterpiece or a catastrophe. Oddly enough both can share the same space. Which happens out of addiction.” – Bill Hojczyk @ Fuzzy McGlide Productions“