History was made in Canada as the City of Montreal in the Province of Quebec is now officially recognized as a “Heavy Metal City.” Montreal City Hall councillors passed a unanimous vote today to have the resolution approved. 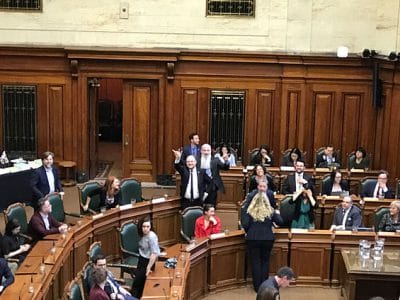 Jimmy Kay of Canada’s The Metal Voice was a special invited guest at Montreal’s City Hall today and witnessed the historic moment.

In terms of why he decided to bring forth this motion to be voted on, Sauve advised (with slight edits): “I have been a metal head my whole life. I am still passionate about it. The scene in Montreal has been extremely strong, the quality of metal music that has been coming out of Montreal (and Quebec), it’s world wide renowned. I wanted Montrealers to know and be proud of this amazing heritage we have. As a metal head, we sometimes don’t get all the loving and respect, so I wanted to give the institution some respect.”

In regard to the cost / benefits of passing this resolution, Sauve opined: “There is no real cost to passing this declaration. I have spent a few hours working on this resolution. Is that a cost ? I work 70 hours a week for the city and I wanted to take a little time to do this. My first priority is to make sure the city runs and this is an added bonus (overtime work). Economically the benefits there is Heavy Metal tourism. This is giving us a big marketing boost nationally and internationally for Heavy Metal tourism. Metal heads across the world might want to come to Montreal and go see the Heavy Montreal festival or another festival or check out a band at one of the bars, of just be part of the vibe. Great marketing for Montreal, no cost.”

You can read excerpts from the interview with Montreal City Councillor Craig Sauve at The Metal Voice‘s website and listen to the interview below: