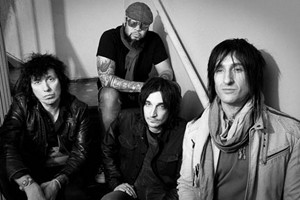 The Compulsions Set To Release ‘Beat The Devil’ On November 8th

On Tuesday, November 8, 2011, The Compulsions will release their highly anticipated full length album, ‘Beat The Devil’. The LP will be available on iTunes with all other major online music outlets to follow.

‘Beat The Devil’ promises to be a straight up rock ‘n’ roll record with unexpected musical moments throughout. In a recent interview with hard rock zine rocksalt.mx, Rob described the upcoming release as sounding like “‘Sticky Fingers’ or ‘Some Girls’ but heavier and from modern day New York City.”

In April 2011, The Compulsions performed to a capacity crowd at New York’s Hudson Hotel with new songs “Hired Gun” and “Eat My Dust” receiving great audience response among longtime set favorites “Groove On” and “Shake Hands With The Devil.”

Three previously released Compulsions EPs, ‘Laughter From Below’ (2004), ‘Demon Love’ (2008) and ‘Been Through Hell’ (2009), have received near-universal critical acclaim including “coolest band in the world” from Classic Rock magazine. More information on the band can be found at www.facebook.com/thecompulsions and www.reverbnation.com/thecompulsions.