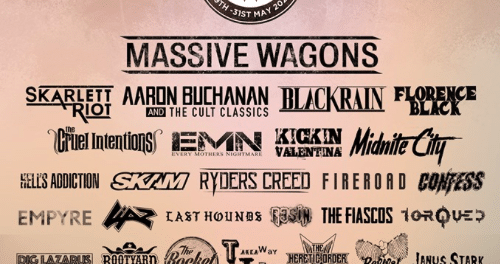 The Cruel Intentions, BlackRain and Kickin Valentina to play 2nd edition of UK’s ‘Call of The Wild Festival’

The 2020 edition of the Call of The Wild Festival will be headlined by UK’s Massive Wagons and also feature Skarlett Riot (UK), Aaron Buchanan and The Cult Classics (UK), BlackRain (France) and Florence Black (UK). 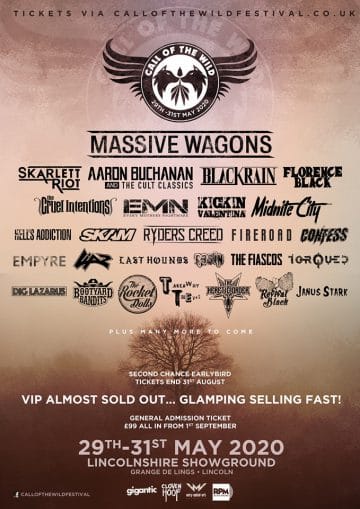 How was the first edition of the Call of The Wild Festival? CGCM Podcast co-principal Rich “The Meister” Dillon (who has attended many concerts with Sleaze Roxx editor Olivier and been mentioned in many Sleaze Roxx concert reviews) attended the inaugural edition and reported in part on CGCM Podcast‘s website:

“And so the inaugural Call of the Wild Festival has wrapped up in Lincolnshire, UK. BTW, that’s pronounced Lincoln -sheer, as I was corrected a few times. This event sort of popped up out of nowhere on the events calendar and I got pretty into it early on. Three full days of multi-genre bands totaling over 70 stormed the Lincolnshire Showgrounds in sleepy Lincoln.

Prior to the journey across, I did my due diligence homework on as many of the “new to me bands” as I could. There were some great discoveries and even more during the event. I missed a few bands that I’d wanted to catch. Caught a few that weren’t on my radar at all. I made new friends with festival goers and met band members alike. And I drank an excessive amount of Cloven Hoof Zombie Cans. All in all, it was a storming success. I’ve already booked and paid for my space at nearby Bridleway B&B for Call Of The Wild 2020!

The layout of the grounds and the organization and thought that had gone into this event was heavily evident from first hitting the entrance gates. Although, we quickly noticed the oversight of lack of trash bins, especially at the entrance gates. But spirits were high. The buzz was like a tangible electricity flowing through the air. The press/media area seemed extremely well laid out and certainly a quiet place to conduct interviews with the artists. I, however, had a different plan in mind. The first day was already earmarked as my “party day”. Well, my top band of the weekend, Trucker Diablo, was on stage today.”

Kickin Valentina performing live at the Call of The Wild Festival in the UK on May 26, 2019: