Swedish sleaze rockers The Cruel Intentions have released a video for their new song “Sick Adrenaline” which was mixed by Eclipse and W.E.T. frontman and Ammunition and Nordic Union guitarist Erik Mårtensson. 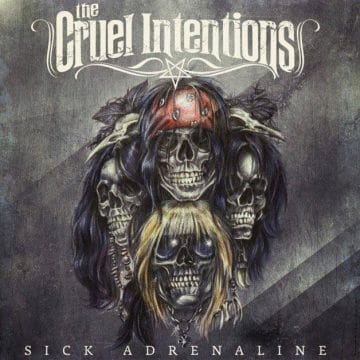 In terms of what the song “Sick Adrenaline” is about, DeVine stated: “If you listen to the lyrics, it sounds like it’s about a stressed out paranoid substance abuser, which it could be. I’ve ran across quite a few in my days. But it’s really about the feeling we all have at times when your skin is crawling and your brain feels like it’s about to pop. When you feel like you’re in a bubble and the world around you isn’t real. Or that feeling of panic and the sense that you can’t escape your own thoughts. If “Borderline Crazy” was about the fun side of partying, “Sick Adrenaline” is the opposite. Everything has a dark side.”

With respect to how The Cruel Intentions ended up working with Mårtensson for “Sick Adrenaline”, Wernerson advised: “The song was supposed to be mixed by Chris Laney like all our other releases but he was out touring with Pretty Maids. I sent Erik an email with the demo of “Sick Adrenaline” and we started talking and ended up with him mixing the song. I’m very pleased with the results, Erik is a great guy and a serious sound nerd so it was so much fun working with him.

The Cruel Intentions have released a number of singles rather than an EP or album in the last two years including the singles “Stare At The Sun,” “Genie’s Got A Problem,” “White Pony,” and “Accidentally Intoxicated.” DeVine stated as follows with respect to the band’s strategy in that regard: “I really like the way we’ve been doing it so far — a new song every few months. Of course, an album would be awesome and we might do that in the future. But if we do that, it would probably only contain new fresh material.”

In terms of what The Cruel Intentions‘ plans for the rest of 2017, DeVine stated: “We will keep on writing, putting out music and playing shows. Hopefully, we’ll get to see some new faces in some new countries. And who knows? We might do an album.”

Thought rock n roll was dead? Think again! After years of silence the time has come! Lizzy DeVine (ex-Vains of Jenna) have teamed up with fellow swede Mats W…