The Cruel Intentions consisting of bassist Mats Wernerson, singer Lizzy DeVine, drummer Robin Nilsson and guitarist Kristian Nygaard Solhaug will be releasing their debut album No Sign Of Relief via Norway’s Indie Recordings on September 21, 2018. The group had released a number of singles with accompanying videos over the years including for the songs “Genie’s Got A Problem,” and “Sick Adrenaline.”

Speaking exclusively to Sleaze Roxx, The Cruel Intentions‘ bassist Mats Wernerson was asked about the time taken to release the debut album. The bassist replied: “We never had the intention to release an album when we started the band. Me and Lizzy started writing songs just for fun and because the scene was lacking a cool and dangerous rock band. People liked it and we had fun doing singles and music videos so we kept going. Eventually, we got a great offer from Indie Recordings and wrote some new songs and recorded our debut album. I think it was really good for us to wait so long, otherwise we wouldn’t have such great songs on the album. We hope people have the patience to wait just a little longer.”

With respect to the debut album’s details, Wernerson advised: “The album is called No Sign Of Relief and it’s 11 tracks and 36 minute pure rock n’ roll ride. No slow songs or power ballads, just high energy rock n’ roll! Me and Lizzy wrote most of the album 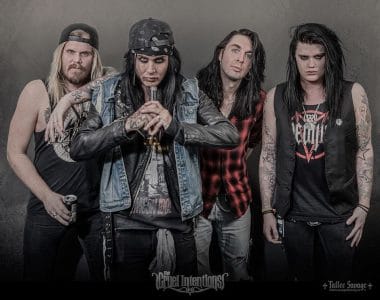 together then Kristian and Robin added their unique touch to each song. I produced the album with the help of Lizzy, and we rearranged the songs several times as we always do. Never satisfied [laughs]! Stamos Koliousis recorded the drums and mixed the album. He really got the best out of us and nailed the sound. It’s raw, heavy and dirty.”

In terms of the new single “Reckoning” that will be released next week, Wernerson stated: “”Reckoning” is for all working class heroes who are tired of taking shit and being told what to do all the time. “Reckoning” is probably one of our most brutal songs yet very melodic with a great hook. I love playing “Reckoning” live! So much energy and attitude.”

The Cruel Intentions are about to embark on their first headline tour of Italy from May 25 to 27, 2018. Wernerson advised: “Italy was bound to happen sooner or later. We have been trying for years to get there but something always happened just before we were about to confirm some dates. Italians are crazy but very passionate about music. I think we got a great fan base in Italy without even been there yet. And we are supported by Speed Stroke and The Lethal Idols! Check the poster for dates and cities! We dan’t wait to rock out and eat pizza with all of you.”

In regard to The Cruel Intentions‘ other future plans, Wernerson indicated: “Our plans are playing shows, releasing singles and enjoying the summer! We have been working hard to get here so we’ll take just a little well deserved break and then we will continue to spread our music like a disease to one country after another.”