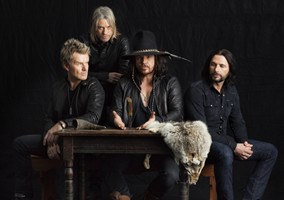 The Cult’s 20-date North American tour is set to kick off on Friday, May 25th in San Diego, California — bringing the band’s incendiary rock energy to major and secondary markets across the continent.

For most of the dates, The Cult will be supported by Against Me! and The Icarus Line. Ticket on-sales will begin later this week — visit www.thecult.us/main/shows for all details and to purchase tickets.

“This is going to be a very intense, high-energy tour,” said The Cult’s vocalist, Ian Astbury. “We are really looking forward to the time we spend on stage connected to our music and our audience. That’s our purpose.”

The Cult — Astbury, Billy Duffy (called one of the post-punk era’s greatest guitarists), Chris Wyse on bass, drummer John Tempesta, and touring member Mike Dimkich on rhythm guitar — are touring in support of ‘Choice Of Weapon’, the band’s first new studio album in five years, due out on May 22nd through Cooking Vinyl.

The album was produced by Chris Goss (Queens Of The Stone Age, U.N.K.L.E. Masters Of Reality) and Bob Rock (Metallica, Bush, The Cult’s ‘Sonic Temple’), recorded in New York City, Los Angeles, the California high desert and the band’s Witch Mountain studio, and written by Astbury and Duffy.

“When we were writing and recording ‘Choice Of Weapon,'” explained Astbury, “We had no agenda, there was no particular destination, no place to be, and no chart position to aim for. We took our time, we went in, we grabbed the jewels, and stayed focused on keeping everything as fresh and as raw as possible. The new songs are a sharpened and heightened extension of everything we have ever done.”

‘Choice Of Weapon’ reflects the survival in today’s volatile world where the sense of entitlement is growing, where we are constantly bombarded by “ones and zeros,” and where the “have-nots” increase on a daily basis. The album poses the questions, “how do we survive and still keep our integrity and humanity? What weapons do we choose to insure a sane future for ourselves and our children, and not de-evolve into a ‘Hunger Games’ scenario?”

On these North American dates, fans can expect classics as well as some of their new songs, including “Lucifer” — not a song about the devil, but a reference to the morning star, the idea of a journey through darkness and decadence to find the road to wisdom; “Honey From a Knife” — based on the Buddhist teaching about the seductiveness of addiction; and “For The Animals,” the first official single from Choice of Weapon. “For The Animals” asserts the rising tensions, the rage and hostility of the growing group of disenfranchised youth in our society and can be heard below.

“Again, we find ourselves with our backs against the wall,” Astbury continued, “and we like that, we like being outside the perimeter. We’re the long shot, so place your bet on us.”