Great news for The Darkness fans as the glam rockers will be releasing a live album entitled The Darkness – Live At Hammersmith on June 15, 2018. 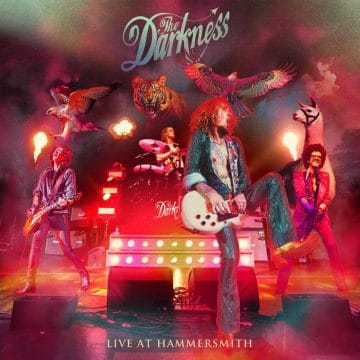 The U.S. leg of Tour de Prance runs through May 2nd in Dallas, TX, continuing on to its final stop in Mexico City, MX on May 4th in support of critically acclaimed new album Pinewood Smile. The tour has been blowing minds across the globe, selling out shows in the U.S., Canada, UK and Europe. National Rock Review raves, “Banging out hit after hit, this juggernaut of a setlist just keeps on rolling.” Antihero Magazine declares, “Rock n Roll is not dead, it is alive and well and goes by the name The Darkness,” LA Weekly says, “Eagerly singing every note, the crowd injected The Darkness’ rock & roll straight to the vein” and Highwire Daze swoons, “Performing selections that spanned a brilliant career, the good vibes and wickedly infectious tunes were thunderous to behold!”

Frontman Justin Hawkins shares, “The Darkness is untamed. It cannot be caged. Some very clever recording engineers have discovered a way to capture its essence; all that remains is for us to release it back into the wild.” He continues, “Life is about experiences, not possessions. This is your opportunity to possess the experience of The Darkness live, as perceived by your ears, leaving your eyes free to scan the road ahead for obstacles, or to watch Emmerdale with the sound off, or to mould clay, or to darn socks, or to look at the beautiful artwork in this magnificent gatefold. Release yourself into The Darkness – Live at Hammersmith.”

To celebrate the release of The Darkness – Live At Hammersmith, two songs from the live album are available for streaming now and as instant-grat downloads with pre-orders. The tracks include the swashbuckling Pinewood Smile highlight, “Buccaneers Of Hispaniola,” and the smash hit “I Believe In A Thing Called Love” from The Darkness’ 4x platinum-selling debut album Permission To Land.

Not resting on their Tour de Prance laurels, The Darkness will hit the road again in June playing arenas across the UK and Europe in support of The Hollywood Vampires supergroup featuring Johnny Depp, Alice Cooper and Joe Perry, and will be opening for the legendary Queen in July in the UK. 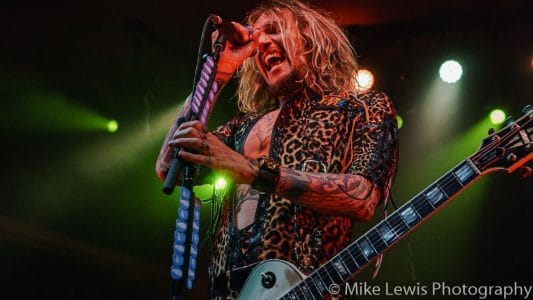 Track List for The Darkness – Live At Hammersmith:01. Open Fire02. Love Is Only A Feeling03. Southern Trains04. Black Shuck05. One Way Ticket06. Givin’ Up07. All The Pretty Girls08. Barbarian09. Buccaneers Of Hispaniola10. Friday Night11. Makin’ Out12. Every Inch Of You13. Solid Gold14. Stuck In A Rut15. Get Your Hands Off My Woman16. Growing On Me17. Japanese Prisoner Of Love18. Christmas Time (Don’t Let The Bells End)19. I Believe In A Thing Called Love