The Dead Daisies drummer Deen Castronovo and guitarist Doug Aldrich were recently interviewed by Alan Dixon for Canada’s The Metal Voice and spoke about the group’s acoustic gigs at music stores prior to any show on their current tour of Canada and the USA. 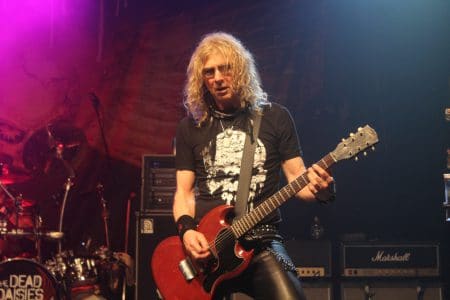 Aldrich stated (as transcribed by The Metal Voice with slight edits): “We have been extremely busy. We are doing in store guitar Daisyland shows, which is a very casual acoustic set where everybody in the band takes a turn singing and we jam and mingle with the crowd.” Castronovo added: “The whole premise of the free acoustic shows is we get really close to the fans. Today, you don’t see that with a lot of bands, unless you pay the band money to see and meet them. We take pictures with the fans, talk to them and be with them. It’s a cool thing.”

In terms of what a fan can expect at a Dead Daisies show, Aldrich advised: “We keep it loose ’cause we want people to have fun. We want the show to be interactive with the fans so we are kind of working together. It’s like a party environment but of course we do take it serious. We try really hard to get it right every night.” Castronovo added: “No egos, no drama — I love that about this band. Everyone gets along. We love doing this.”

Sleaze Roxx recently attended The Dead Daisies concert at The Phoenix Concert Theatre in Toronto, Ontario, Canada and stated in its review: “So moving forward, I could potentially give a play by play of every song, but I think I don’t need to. There is quite a large amount of material to cover, so we’ll just speak of some highlights. The track listing will appear beneath. With that said, the show was a great mixture of the band’s three albums that Corabi has sung on. Aldrich was of course was showing all his versality as a player. He would go back and forth on the stage. There would be those points where he would be stationary behind the microphone due to the fact that his mouth would be positioned on his talk box. This form has become very prominent in the band’s music as of late. I love the talk box as a great form for adding texture to a song. I myself have become somewhat of a master of this device over the years as it was a focal point in the Bon Jovi tribute band I once played in. Then of course we can’t help but mention Aldrich’s amazing slide guitar talents. As you’re reading you may think to yourself, “Wow, this guy really has a man crush on Aldrich!” It’s not really a man crush, but more of an affinity for a player that does everything perfectly. So many of the things that Aldrich does as a player, I do myself, but I will be the first to admit that he is far better than I am!”

Interview with Doug Aldrich and Deen Castronovo by The Metal Voice: