The Dead Daisies featuring singer John Corabi and guitarist Doug Aldrich have released a video for their song “Make Some Noise” from their upcoming new live album Live & Louder, which will be released on May 19, 2017. 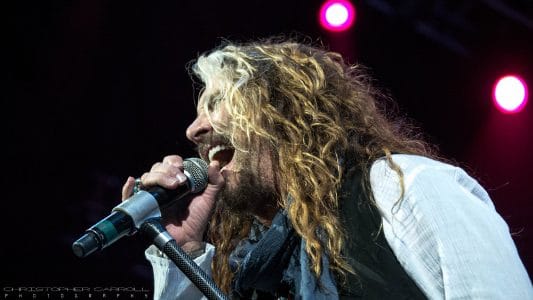 For the latter finish, Sleaze Roxx commented: “Shock guitarist John Tennant‘s theory is that a musician usually has three “great” albums in them. If that’s the case, it appears that singer John Corabi has just met his quota with The Dead Daisies‘ third album Make Some Noise. After being part of The Scream‘s much revered self-titled debut album and Mötley Crüe‘s self-titled and only album without Vince Neil, Corabi has hit the nail on the head one more time fronting The Dead Daisies. Make Some Noise is a pure ’70s sounding hard rock record that has been receiving rave reviews ever since it was released. How come Corabi‘s first album with The Dead Daisies — Revolucion (2015) — did not resonate with Sleaze Roxx readers and Make Some Noise reaches the #3 spot on the year end readers’ tally? The major change this time around for The Dead Daisies is that guitarist Doug Aldrich is in the band with guitarist Richard Fortus and keyboardist Dizzy Reed leaving the group to take part in the Guns N’ Roses‘ reunion. Given Aldrich‘s songwriting contributions to the two stellar Whitesnake albums — Good To Be Bad (2008) and Forevermore (2011) — it’s not surprising to see that he has taken The Dead Daisies to that next level.”

The Dead Daisies‘ video for “Make Some Noise”: