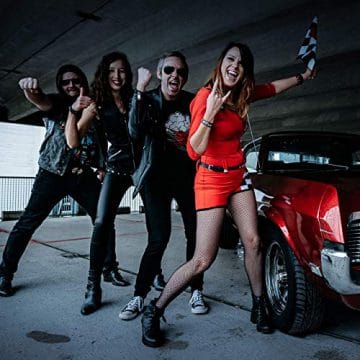 Dutch rockers The Dirty Denims consisting of lead vocalist / guitarist Mirjam Sieben, guitarist Jeroen Teunis, bassist Marc Eijkhout and drummer Suzanne Driessen have released another ‘live’ video for a track from their latest album Ready Steady Go!. This time, the song “Beautiful (My Darling)” is getting the ‘live’ video treatment.

“The brainchild behind The Dirty Denims appears to be guitarist Jeroen Teunis who wrote all of the music for the songs on Ready Steady Go! and he also penned the lyrics with lead vocalist Mirjam Sieben. Speaking of lyrics, for the most part, The Dirty Denims‘ lyrics are pretty simple such as the obvious AC/DC references on “Thunder From Down Under” but they did come up with some very witty lyrics at times such as the phrase “Rocking is our expertise” that stands out during the title track. After listening to the killer title track, I was at first a little concerned that the some of the other songs were a little too simple or sometimes a little slower paced than I would like but after a few listens, I found myself singing along to all of the songs so those concerns went out the window.”