Dutch rockers The Dirty Denims consisting of lead vocalist / guitarist Mirjam Sieben, guitarist Jeroen Teunis, bassist Marc Eijkhout and drummer Suzanne Driessen have released a video for their single “Hit Me With You Best Shot.” The single was recently released digitally for the first time (with the tracks “Money Back Guarantee” and “Tell Me What You Want From Me”) and dates back to 2015. The three-song single can be purchased directly from The Dirty Denims‘ website. 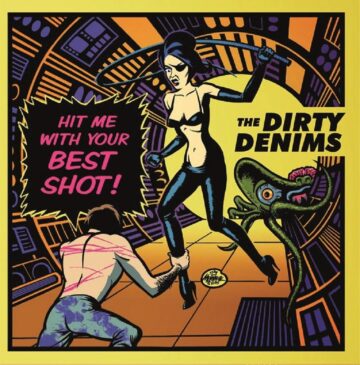 “The Dirty Denims — where have you been? Once again, here is yet another band that I had never heard about until a few months ago that has come up with an absolutely killer record but that has been around for more than a decade. It just shows you that no matter how many new bands that Sleaze Roxx has covered in almost 20 years, there are always some new groups to discover that fit the website’s musical scope almost perfectly. Think a faster paced AC/DC meets old school Joan Jett & The Blackhearts and you have a flavour of what The Dirty Denims sound like.

My first taste of the Dutch rockers goes back to November of last year. As soon as I heard the band’s title track to its latest EP Ready Steady Go! – Part 1, I knew right away that this is a group that should be covered on Sleaze Roxx. Although I liked what I heard, it wasn’t until I put on the full-length CD Ready Steady Go! last week for a spin (I’m not sure what happened to the Part 2 EP) that I realized just how much I was going to dig The Dirty Denims‘ new album. First, my arms started playing some air guitar while listening to the intro guitar riff, which was then followed by some air drumming when the drums really kicked in. By the time that the song got to the chorus section, I was happily singing “Ready Steady Go!.” I say “happily” because The Dirty Denims have branded their type of rock n’ roll as “happy rock” which fits it to a T.”

The Dirty Denims‘ “Hit Me With Your Best Shot” video: