The Dirty Denims release video for track “Roll The Dice” 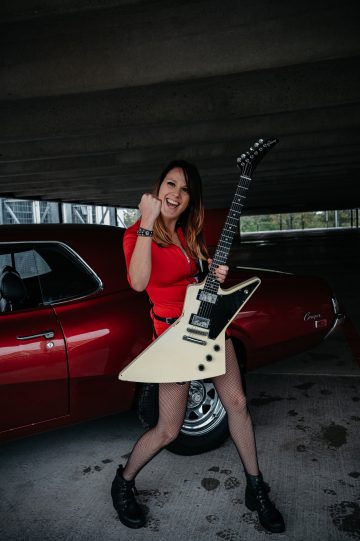 “And that’s the beauty of the album Ready Steady Go! as it simply rocks from start to finish with no breaks in between. The Dirty Denims do take some risks on certain songs by incorporating additional instruments. For the most part, those risks pay off but I could definitely live without the unnecessary organ on “Too Much Information.” That being said, the piano on “Roll The Dice” works really well and the same goes for the handclaps from bassist Marc Eijkhout and drummer Suzanne Driessen on “Messin’ Around.” While checking out the track listing for the album, I noticed that the second song “Last Call For Alcohol” was repeated at the end but under the guise of a ‘Hangover Version.’ I have to confess that I have always hated when bands repeat tracks on records even if the versions are slightly different but this time around, I was converted. Why you may ask? Well, let’s just say that the “Hangover Version’ of “Last Call For Alcohol” is an absolutely killer version of the track complete with a whistling solo that rivals the very memorable one on Guns N’ Roses‘ classic track “Patience.”

Whenever I really like an album from a band that I am just discovering for the first time, I usually end up hunting down all of the group’s discography. Two years ago, it was The Lazys who caught my attention and although I was able to find quite a few of their very hard to find EPs, the reality is that the Australian rockers refined their sound in a huge way once they got some help from Billy Talent guitarist Ian D’Sa in the songwriting compartment. Last year, it was seemingly little known Canadian rockers Page 38 that caught my attention. Page 38 experienced even more growth than The Lazys from their first two albums to their brilliant EP Burning The Midnight Oil released last year. This year, it is The Dirty Denims that have caught my attention and luckily for me, all of their prior albums are on sale on their website.”