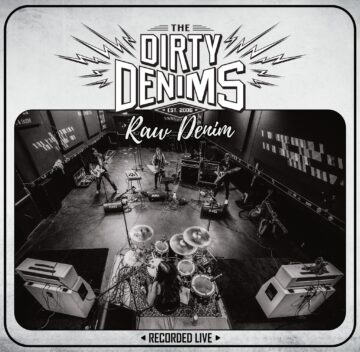 “With their latest release ‘Raw Denim’, that will be out on December 10 th 2021, The Dirty Denims finally fulfill their desire to release a live album. The album (digital, CD and vinyl) contains a selection of 15 of their songs. The vinyl contains 1 extra bonus track.

During a live session in the venue of POPEI Eindhoven (NL), the band members played the songs live in a studio setting. “We always liked live radio sessions and live bootlegs from our favorite bands, honest live recordings with raw power. A mistake or false note doesn’t matter, as long as the energy is right”, says the band.

“When recording in the studio you get as many takes and overdubs as you like, but when playing live you only get one or two takes. So what you hear is what we played on that afternoon in Eindhoven. Raw Denim stands for doing what we like best, playing rock n roll, loud fast and dirty.”

15 years ago, in 2006, the formation played its first gig. They have now performed more than 400 shows and have released 2 EPs, 3 albums and a few singles. The selection of the songs for this new album is a mix of live favorites and songs that the band wants to give a second chance through a new, more energetic recording. “We are a band that you should see live. A live album fits well with what we bring live on stage.””

The Dirty Denims‘ “Fit In Stand Out” (recorded live) single: