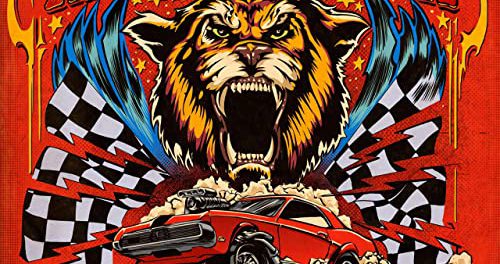 Dutch rockers The Dirty Denims have unveiled a live in the studio video for their track “Thunder From Down Under” from their latest album Ready Steady Go! which finished at #3 on the Sleaze Roxx’s Top Ten Albums of 2020. Sleaze Roxx stated in

“The Dirty Denims proclaim themselves as playing “happy rock” and you’ll likely be hard pressed to find outwardly happier rockers than lead vocalist / guitarist Mirjam Sieben, lead guitarist Jeroen Teunis, bassist Marc Eijkhout and drummer Suzanne Driessen. The Dirty Denims play a brand of rock n’ roll that seems to be a cross between Joan Jett & The Blackhearts and AC/DC. They do it very well and Ready Steady Go! is full of anthemic rockers such as the title track, “Thunder From Down Under” and “Messin’ Around.”

After being blown away by Ready Steady Go!, I ended up purchasing most of The Dirty Denims‘ prior discography and I was pleasantly surprised to hear that the band’s previous album Back With A Bang! (2017) was also really good! The Dirty Denims aren’t scared to take some chances when delivering their “happy rock” and it really paid off for them including with the handclaps on “Messin’ Around” and the whistling on their stellar acoustic / hangover version of their track “Last Call For Alcohol.” I don’t know how or why I wasn’t aware of The Dirty Denims until late last year, given that they have been around since 2006, but this is definitely a band that is worth checking out if you’re not familiar with them.”

The Dirty Denims‘ “Thunder From Down Under” ‘live from the Isolation Sessions Effenaar’ video: