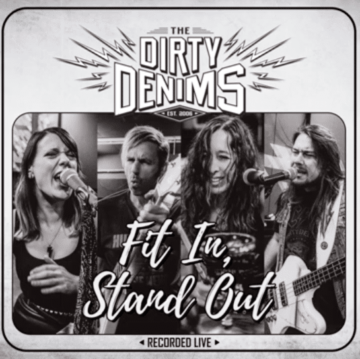 Dutch rockers The Dirty Denims consisting of lead vocalist / guitarist Mirjam Sieben, guitarist Jeroen Teunis, bassist Marc Eijkhout and drummer Suzanne Driessen have released the first live single titled “Fit In Stand Out” from their upcoming new live album Raw Denim, which will be available in December 2021. The track “Fit In Stand Out” first appeared on The Dirty Denims‘ album High Five, which was released in 2014.

Sleaze Roxx interviewed Sieben and Teunis back in August 2020 and noted that the group indicates on its website that it plays 40 to 45 live shows per year, which is a big amount for an independent do it yourself type of band. Teunis indicated: “We really, really miss playing live. That’s why we make the records, because we like to play new songs. The best part of the new songs is an album that you can play live again. The fun onstage with the people and crowd, we’re really missing at the moment. We have a few online shows. You can still have contact with the fans and that’s great because people can react while you’re playing and after the song, Mirjam will go to her computer and see the comments. But it’s not the same as playing a real live show because when you play live, the energy from the crowd affects you when you’re playing. We can’t wait for the new live shows.”

The Dirty Denims‘ “Fit In Stand Out” (live) single: