The new band consisting of guitarist George Lynch, bassist Jeff Pilson, drummer “Wild” Mick Brown and lead vocalist Robert Mason have now announced their new band name THE END: machine rather than the previously chosen Superstroke. The band will be releasing its debut album in the spring of 2019. 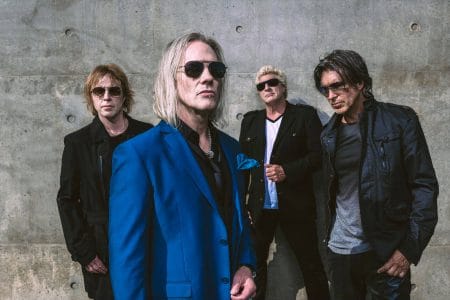 “BREAKING NEWS: George Lynch, Jeff Pilson, Mick Brown, and Robert Mason have announced that they are changing the name of their previously announced new band, Superstroke, to THE END: machine.

“The recordings are nearly done and we are really happy with the way it is turning out,” says bassist/producer Jeff Pilson. “We think that, notwithstanding the obvious nod to our past experiences together, The End: machine sound has a unique identity. Sonically, this is not just ex-Dokken members with a different singer or a rebooted incarnation of Lynch Mob. This is a new sound. Everyone has been doing great on the album and there is a lot of energy and a lot of focus.”

THE END: machine, featuring George Lynch, Jeff Pilson, and Mick Brown from the classic Dokken line-up together with singer Robert Mason of Warrant (and previously, Lynch Mob) will release their debut album in spring 2019 via Frontiers Music Srl.