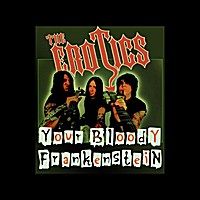 New York based rockers The Erotics have released a brand new single entitled “Your Bloody Frankienstein” from their forthcoming EP ‘Boulevard Of Choking Screams’. The single is available for purchase and preview at both CDBaby.com and iTunes.

With their sleazy antics of straightforward rock & roll, The Erotics bring forth their lyrical dealings of drinking, drugs, and all other arrays of political incorrectness. The Dead Boys, Johnny Thunders, and Alice Cooper are the primary inspirations of this band, as heard on their 1997 debut full-length ‘Born to Destroy’.

October 2010, saw the release of ‘Today The Devil, Tomorrow The World’ by The Erotics, produced by Don Fury (Agnostic Front, GG Allin, Helmet, Quicksand, and Warrior Soul) on the independent UK label TrashPit Records/Big Zee Music. With more than 7 releases and 10 US/European tours under their belts over the past decade, and songs placed in many major TV networks, The Erotics have and will always deliver un-apologetic dirty rock n roll.

The Erotics are currently back in the studio, once again with Don Fury, recording a brand new EP due out in late 2011.

More informtion on The Erotics can be found at www.eroticrocknroll.net and www.facebook.com/theerotics.