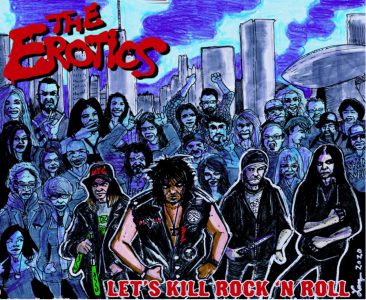 The Erotics‘ press release indicates in part (with slight edits):

“In early 2020, The Erotics began writing and rehearsing a batch of new songs set to become the band’s next record. As the songs streamed out of Mike Trash’s fret board, the band frantically rehearsed and defined all the details of the songs, working to batten down the hatches for the rapidly approaching studio date of Feb 20, 2020.

Of course, never being a band to play it safe, The Erotics decided to do the only sensible thing: throw caution to the wind and invite a contingent of dedicated fans to Don Fury Studio to take part in a live recording of 12…no make that 13…wait, on second thought, how about 14 brand new songs!

This is the record of that experience. Now let’s kill rock n roll.”