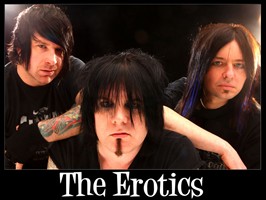 The Erotic’s ‘Today The Devil, Tomorrow The World’ Available Digitally

The Erotic’s brand new album ‘Today The Devil, Tomorrow The World’ is now available for digital purchase at iTunes.com, Amazon.com and CDBaby.com.

Physical CD copies of ‘Today The Devil Tomorrow The World’ will be released via TrashPit Records on Halloween.

Very few bands can weather the on going changes in today’s musical climates but Albany, New York’s THE EROTICS are a breed unto themselves. Led by the notorious Mike Trash on vocals and guitar, the streamlined trio completed by bassist Billy Beer and drummer Johnny Riott proudly display the scars of a career in the underground scene that would make most so called rockers squirm in disbelief!

The new album produced by the legendary Don Fury (Agnostic Front, GG Allin, Helmet, Quicksand, Warrior Soul), sees THE EROTICS return to their sleaze filled, pop metal anthems following the dark departure that was 2008’s ‘RUBBISH’ opus. Trash upaologetically still spits venom filled lyrics moulded to the most infectious stadium filled choruses that should have Alice Cooper banging on his door at the early morning hours – should Trash have bothered to have even left the venue bar!

The album title track and fist pumping Hate Anthem of the Decade – ‘Anything’ – are both available for streaming at www.facebook.com/theerotics or www.myspace.com/theerotics