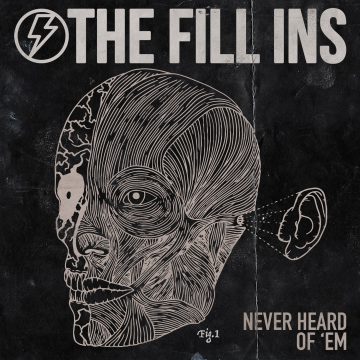 “Never Hear of ‘Em​ is the fourth full album available now from The Fill Ins in ​advance form through their website​, with the official street date / digital release on March 27th, 2020. Released under Hobo Wolfman Records​ and pressed to random color 12in vinyl, this new full length follows the release of their cassette tape EP ​No Love Lost​ ​in 2018, and their previous full album ​The Time Is Now​ in 2017. While the band was without a drummer, the group hired ​DJ Buchanan​ from The Walbournes to record the new record at Fithman Studios ​[not a typo / correct spelling]​ in Charlotte, North Carolina.

The group recorded a batch of seven new songs along with ​Alex Stiff​ on guitar & vocals, ​Mikey Black​ on lead guitar, and ​James “Captain” Nunn​ on bass, with guest vocal spots by ​Jeff Clayton​ of the legendary punk band ANTiSEEN on “​Return To Sender​”, and singer / songwriter ​Kelsey Ryan​ on “T​hinkin’ About You​”. In addition to implementing 12 string guitars, acoustic guitars, and other dynamic elements; this album showcases their rock n roll roots and the fun that can be had with the genera. From elements of funk-rock with the leadoff song “​Dangerous​”, memories of classic rock like Thin Lizzy and KISS with songs like “​Personally​” and “​Dramatic”​ , even rounding off the album with a slow cut in reflection of their journey as a band so far with “​Drown Your Blues​”. The lead single “​Return To Sender​” showcases a little bit of everything that can be expected from the record with catchy riffs, tambourines / shakers / claps, and expanded vocal ranges; showing that the band is far from slowing down. “​Long Way To Go​” is the 2nd single selected due to its fun nature and catchy lyrics; sporting one of the band’s favorite solo breaks from Mikey Black and DJ Buchanan.

The title comes from an inside joke within the band that locals still haven’t heard of the band 5+ years in, and even made a ​promo commercial poking fun at the idea​.

This record is also features three songs from the ​No Love Lost EP​ (exclusive to the vinyl pressing / not part of the digital release​) and marks the first release from the band on 12in vinyl; something the group is very excited for and proud of. Pressed to random color vinyl and released on ​Hobo Wolfman Records​; no two records will be alike and provides a fun experience for the listeners comparing their vinyl colors on social media with the hashtag #thefillins.

Online orders are shipping now​ and purchases can be made at ​www.thefillins.com/store​ in addition to local shops in Charlotte , North Carolina and Chicago, Illinois in late March 2020.”