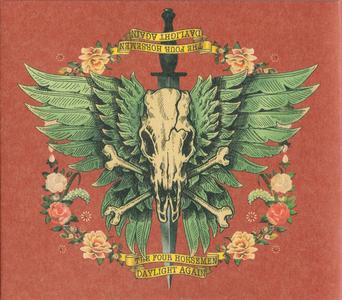 The Four Horsemen have just released a bunch of new material. On sale at the band’s revamped website (www.thefourhorsemen.com) are “Daylight Again’, 21st Anniversary Editions of the ‘Welfare Boogie EP’ and ‘Nobody Said It Was Easy’, Haggis’ solo release ‘Songs From The Mission Of Hope’ and the hard to find ‘Left For Dead’ DVD/CD.

Regarding the new CD ‘Daylight Again’, Four Horsemen bassist Haggis states, “The missing Horsemen album! At last! Is Frank C. Starr on it? No – We weren’t talking at the time. This is a collection of songs recorded between the break-up of the band during the Nobody Said It Was Easy tour, and the reformation for Getting’ Pretty Good. It features Dave Lizmi and I, southern singer/multi-instrumentalist Tim Beattie, ex-Cult drummer Lez Warner and bassist Duane D. Young. It was recorded in NYC whilst the dust settled. No one really knew whether the original band was ever going to record again. If we had, these are the songs we would have been playing. We’ve included ten previously unheard songs. There’s also part 3 of The Horsemen Story. The triple gatefold sleeve features a shot of us taken in the studio. If you dig Tired Wings and Somethin’ Good, this is the next step up from there.”

The reissue of Nobody Said It Was Easy contains three extra album outtakes, “She’s Got It”, “Homesick Blues” (Harmonica Version) and “Born To Boogie”.

For more information, and to purchase these excellent albums, visit http://www.thefourhorsemen.com/store.html.