The Gasölines to release album ‘Cannonball Run’ on September 10th 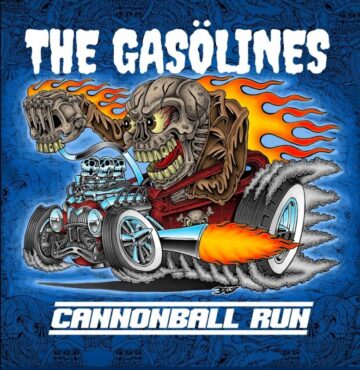 Of course you do.

The Gasölines is a celebration of all this and put into 2020s. This is music from a time when rock and roll was all about rhythm, blues, fun and rebellion against society. When the music gave the young generation their own special identity and voice, opposed to the conservative and mundane life of their parents.

In this day and age, we are surrounded everywhere by voices who tell us what not to do, not to eat, not to drink, not to drive, not to look like. One of the few things the moralists of today applaud and allow you to do is ride a bicycle. Which is cool enough if you are lucky to own vintage a DBS Apache or a DBS Tomahawk.

This is why you need The Gasölines. High octane rock.

Norway was a Mecca for high energy rock bands like Turbonegro and Gluecifer. Buckle up for safety, here is The Gasölines! Morten Nilsen – in this case Morten Gasöline – is here with his brand new creation The Gasölines and he previously recorded and toured to international acclaim with bands such as Pain City and Meltdown.

“This is a celebration of 50 years of rock that will continue to inspire the world in the foreseeable future. Rock and roll will never die. It is also a celebration of how rock and roll has influenced generations, daily lives, fashion, language and attitudes in a way few other social developments have equaled, and also V8 engines, twin-cams and gasoline. New technology will always replace the previous, even these amazing engines, and it’s happening much faster than we could have imagined. Even the muscle car king Dodge has announced that their V8 days are numbered. Now it’s a very good time to celebrate these cultures that are inextricably connected”, he says.

All songs and lyrics were written during six weeks in December 2020 and January 2021. Creativity can be like constipation and diarrhea. The original plan was to just replace the strings, but I ended up with a full album for a new concept. The ideas just kept coming. Yes, I made all the music, lyrics, titles and artwork, but Adrian – who is among the very best guitarists in this business – added his signatures and touches on lead guitar. They give the songs the right flavor and color. He also shows here that he is a wonderful drummer as well. Incredible! Sindre’s vocal suits the music just perfect, so that’s a perfect combination. On top of that, Eiliv was the perfect producer and mixer.

The album is recorded with proper amps, no triggers on drums, no autotune, and with super high quality analogue equipment in the studio.

“I want this to sound old-school, real and organic, a bit opposed to a lot of new music who is edited to such perfection and have so many effects that it sounds like it has been soaked in antibac. Sterile and boring. This music is supposed to sound raw and full of energy”, he says.

Here’s the story behind the band name: “It’s hard to come up with something unique among “billions” of band names. To keep the tradition it had to start with “The”, end on “s”, and a main name that everyone can associate with, plus have a double meaning with “öl” which is “beer” in Scandinavian languages. Beer and rock is of course a perfect combination.”

This is rock made by the people and for the people. The elite hipsters with their man buns, fancy coffee and electric kick scooters will wrinckle their nose and most probably not care about this at all. Which is perfectly fine! This is our rock, our culture, and what we all need now is to party and celebrate each other.

To be mentioned in mainstream media for a release today, you have to talk about mental issues. I have done that on this album, of course. In this culture, especially with men, there has been no tradition to talk about mental issues regarding gambling, alcohol, post traumatic sufferings, anxiety or love. We’re giving them a voice here. If people want to listen to the album and hear partying and fun only, then that is ok, but there are always at least two sides to a story and I wanted to capture it here.