The Glorious Sons release video for “Sometimes On A Sunday”

Complex who premiered the Canadian rockers The Glorious Sons‘ video for “Sometimes On A Sunday” reported the following on the video: 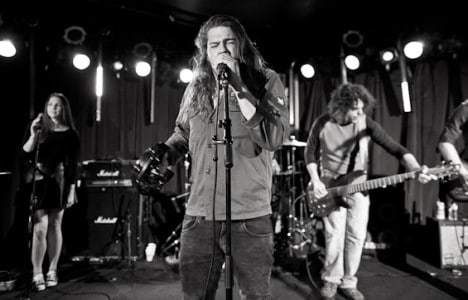 “It took us three months to assemble four minutes of footage,” The Glorious Sons’ vocalist Brett Emmons told Complex. “I asked our director Dane Collison to go out and find footage of struggle, violence, and chaos, because I wanted viewers to have to watch the things that happen in our world that most of us chose to ignore.”

Emmons was hoping an intense visual treatment would evoke something a little deeper in the audience, as opposed to a standard performance video. For a song that’s concerned with finding existential meaning, a stark black and white visual, peppered with some borderline-disturbing archival footage, is a fitting counterpart. “The message in this song isn’t as black and white as equating God with man,” he added. “It is about power, materialism and the things we do. The way we feel as human beings, as we strive to achieve some sense of heaven.”

Sleaze Roxx stated the following in its review of The Glorious Sons‘ last album The Union: “This is one record that I knew I would like at least half the songs on before even purchasing it. The reason of course is that I bought The Glorious Sons‘ The Union debut, along with their Shapeless Art EP, immediately after seeing the band open for Airbourne a month ago.” Sleaze Roxx went on to conclude: “Have I gone soft? I have wondered that myself as I have been playing The Union time and time again ever since acquiring it. Or perhaps, and this is the more likely answer, The Glorious Sons have delivered in The Union a record that transcends musical genres and can be appreciated by fans of just about every rock genre due to its sheer brilliance.”

The Glorious Sons – Sometimes On A Sunday (Official Video)

The official music video for The Glorious Sons single “Sometimes On A Sunday”, from the re-issue of the album “The Union”.Listen to The Union: http://smartur…