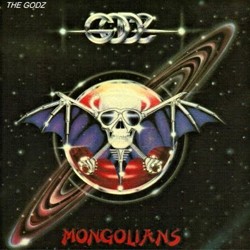 The Godz were signed to Casablanca Records in 1977 and would later that year open up for KISS on the Love Gun tour. The Godz were sex, drugs, and rock-n-roll… and definitely worthy of the cult status they now have been given. Major tours were nothing new for The Godz, as they warmed the stages for bands like Angel, Blue Oyster Cult, Kansas, Iggy Pop, and others. The stories revolving around The Godz are legendary as they quickly became well-known as rebel-rousers. Whether it was starting a bar brawl, shooting up the stage monitors, or doing tons of Jack Daniels, drugs, and women… the band became favorites to the biker crowd.

While many cult bands are just that — cult bands whose stories have been written in stone — The Godz have yet to call it quits. Band leader Eric Moore is entering his fourth decade in the music business by releasing three albums and a first ever DVD via FnA Records. The label will release three albums by the Godz in May of 2012.

The first album will be the legendary 1978 Laredo Texas show — the full show has been remastered and the sound has been enhanced and will surely be a treat for old-school Godz fans.

The second release will be the first ever American release of the classic Godz album ‘Mongolians’. ‘Mongolians’ is a highly sought after gem that Godz fans have been clamoring for over the years. Probably the band’s heaviest album, ‘Mongolians’ initially sold well (if you could find it) with very little label support. This album usually commands a high dollar price tag and trying to find a copy in this day and age is like trying to find a needle in a haystack. ‘Mongolians’, which will be sonically enhanced and remastered, will now be available to fans new and old for a decent price via FnA Records.

The last album being released will titilate and stimulate true Godz fans. Chock full of never before released tracks, b-sides, import only tracks, live tracks, and more, ‘The Godz – From The Vault Volume 1’ is sure to become a collectors piece amongst the die-hard Godz fans.

All CD’s will be available at a fan friendly price via www.fnarecords.net, and a limited number of each CD will come autographed and numbered with an official hologram sticker. Special package deals will be available for those that want to purchase all three albums at once. The first ever Godz DVD will be completed sometime this summer as fan material is still being compiled.