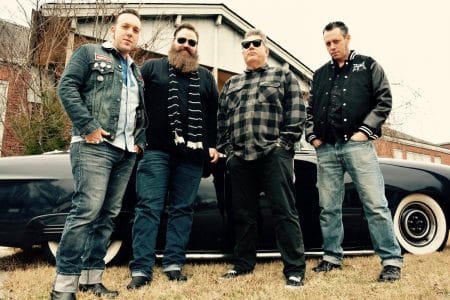 The Grave Rollers first made their songs “Death Comes A Knocking” and “Valerie” available for streaming last month and have now released two more songs — “Wrong Way” and “4th And Vine” for streaming via their Reverbnation page (see below).

Speaking exclusively to Sleaze Roxx, Leone revealed what made him join/form The Grave Rollers: “The Grave Rollers were supposed to be a fun project to get me playing music again post 21CG. Nothing more. My idea was to dig up songs from my catalog and our guitarist Tommy Ray was going to do the same from his time in previous bands. We were just sitting at our neighborhood pub and said to each other “Why not? Let’s go have some fun.” At that time, Dirtbag Love Affair was not in talks of reforming. But when we got together, we kept writing songs, the band took on an identity of its own, and before we knew it we were planning on recording the music. One thing I did not consider is how much of a pain in the ass it is to start a new band from scratch. Unfortunately my biggest reach was 21CG, and since those social media sites got shut down, it’s been like starting from square one in many ways.” 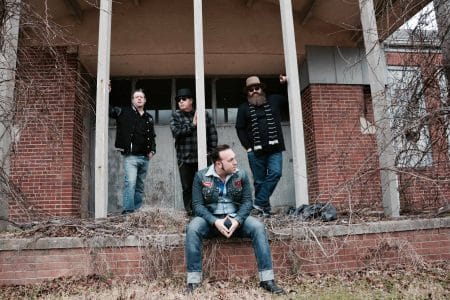 In terms of how The Grave Rollers differ from Dirtbag Love Affair and 21st Century Goliath, Leone advised: “To me it’s very different from Dirtbag. The rhythm section has two completely different styles, guitars are way different, the harmonica acts as lead for many songs in this band. So musically even though I consider both punk rock n’ roll, they differ. The Grave Rollers take a couple pages from our time as a traditional hot rod club as well. Tough guy greaser punk ya know? I like to think if James Dean was a punk rocker, he would have been listening to The Grave Rollers speeding down a highway. As for how it differs from 21CG, it’s WAY more stripped down. One guitar, we recorded the album live so the imperfections are there unlike the perfection we would go for on the Goliath albums. And lastly, the songs seem to be coming from everyone. Tiki [Chris Gillikin] on bass wrote a song, Johnny [Marlow] the drummer actually wrote a couple — I know that’s scary — Tommy brought a few to the table. I took more of a role in tweaking composition and rounding out vocals and choruses, which I am perfectly fine with!”

You can check out The Grave Rollers via their Facebook, Reverbnation and Soundcloud pages.

Link to The Grave Rollers‘ Reverbnation page to access four songs including “Wrong Way” and “4th And Vine”:

The Wrong One | The Grave Rollers

The Wrong One by The Grave Rollers, Punk music from Huntersville, NC on ReverbNation