Nashville, Tennesse, USA rockers The Great Affairs have released a video for their song “What You Get Is Gone” from their upcoming new album Ten & 2, which will be released via Kivel Records on June 22, 2018. 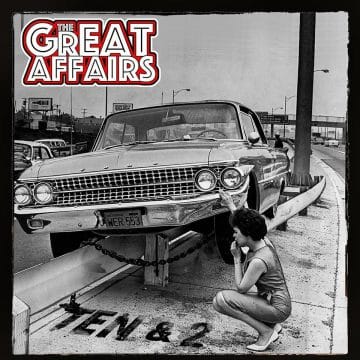 The Great Affairs‘ “Biography” on their Facebook page states in part (with slight edits):

“Over the course of several releases: 2009’s ‘The Great Affairs‘, 2010’s ‘Ricky took the wheels..‘, 2011’s ‘Happy Ender‘, and 2013’s ‘4‘, The Great Affairs have undergone a not-so-subtle transformation from the dusty, Americana-leaning fare of their early works to the grittier, pop-infused rock n’ roll stylings of their latest, ‘Dream In Stereo‘.

Swapping out rhythm sections in 2013, after a brief hiatus from performing or recording, the band acquired an additional lead voice in drummer Kenny Wright, whose Paul Rodgers-inspired turns at the mic proved a surprisingly effective foil for the more Paul Westerberg-flavored approach of singer/songwriter Denny Smith.

While they may have cut their teeth on KISS and The Black Crowes, or Queen and Humble Pie, The Great Affairs simultaneously draw from the pop well of such ‘80s icons as Rick Springfield and Bon Jovi, juxtaposing these elements with the sound of more contemporary acts like The Gaslight Anthem, Butch Walker, and The Stereophonics, to offer up the kind of sweaty, gimmick-free, big guitar anthems that’ll rattle your brain, just as easily as they might slip into lonesome troubadour mode and soothe your soul.

The Great Affairs recently signed to NY-based Kivel Records for the release of their new LP, due in April 2018. Once again recorded with Grammy-nominated mixer and engineer Michael Saint-Leon (Buddy Guy, James Cotton), this record finds the band pursuing a more muscular, guitar-heavy sound, owing as much to their classic rock forebears as formative efforts had to the singer/songwriter model. Inspired perhaps by the 2017 covers collection ‘Six Pack’, where the band mined and reimagined gems from ‘70s FM stalwarts like Thin Lizzy, Fleetwood Mac, and Cheap Trick, the forthcoming collection openly embraces their various influences to create a sound that is both comfortably familiar and refreshingly its own.”

The Great Affairs are Denny Smith on lead vocals, guitars and harmonica; Patrick Miller on lead guitar and vocals; Matt Andersen on bass and vocals; and, Kenny Wright on vocals, drums and percussion.”

The Great Affairs‘ “What You Get Is Gone” video:

The Great Affairs “What You Get is Gone”

The newest and one of the brightest from the ’18 Kivel Records stable. THE GREAT AFFAIRS. New album TEN & 2 due May 2018The Great Affairs are:Denny …