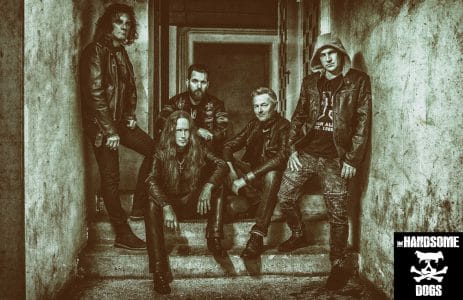 Sleaze Roxx interviewed The Handsome Dogs guitarist Pete Potens back in October 2018. With respect to new music to follow up the band’s debut album Unleashed released last year, Potens advised: “We are right in the process of writing more songs. As I said before, we started as a covers band and right now, we have about 16 songs. We want to write five or six more so we can do a full-length show. So far, out setlist only gives us about one hour and that’s OK if you’re opening for someone but in Germany, if you do a headline show, you need at least one hour and a half to two hours of program. So our priority right now is to write five or six more songs so we can play two hours through. In the meantime, we take whatever we can get [laughs]. It’s really hard for bands like us in Germany, I must tell you Olivier. Germany is very big with heavy metal let’s say and also the symphonic and what do you call it? Epica, Nightwish and stuff like that.”

Potens continued: “Symphonic metal type stuff. It’s really huge in Germany singing about historical things. These guys are all in black with make-up and stuff like that. That’s just huge in Germany and we’re just not like that. Since we are more like hard rock n’ roll, even though the new material is going to be a little heavier than the old stuff, but it’s not easy for us to get gigs. And I have to tell you, we don’t have a manager so we have to do our own management. I don’t know if you want to include that or not. I am just telling you. Basically, we all have day jobs and we have to mind our day jobs and use our spare time to put everything together. Is we are looking for management right now and somebody that can take care of this stuff so we have more time to focus on writing music and stuff like that.”

The Handsome Dogs‘ “King of All Sins” song: